He wasn't allowed down the tunnel ....the tunnel was dangerous so the priest had warned him, after a generous clip around the ear!
Nevertheless at twelve what can one expect, the curiosity was killing him, so choosing the moment carefully while Father Gonzalo was in the sacristy he once again tried to explore the tunnel. This time he picked up a candle extinguisher pole to lever open the slab trapdoor to the forbidden depths. The gush of dust and air and the reek of rotten things assailed him from the tiny crack that his arduous efforts produced causing him to turn away sharply;a reflect to escape the stink. Dismayed he saw the slab slip back down to cover the hole once more with a resounding thud echoing down through the dark corridor. He waited in silence hardly daring to breathe until he heard the ominous sound of the clack clack of Father Gonzalo's heels on the cobbled floors, announcing the end of his adventure and producing the feeling that he needed to be somewhere else urgently, which made him drop the pole and run. The years of familiarity with the churches' confusing interior saw him up and on the flat back roof of the church winging his way to his personal shortcut in a flash. He slithered down the church wall ignoring the painful grazes and with a final jump into the street below, he ran like the wind to his home sheltered under the castle wall.
However he knew he would not hear the end of this and word would reach his father but not today;today he had things to brag about! 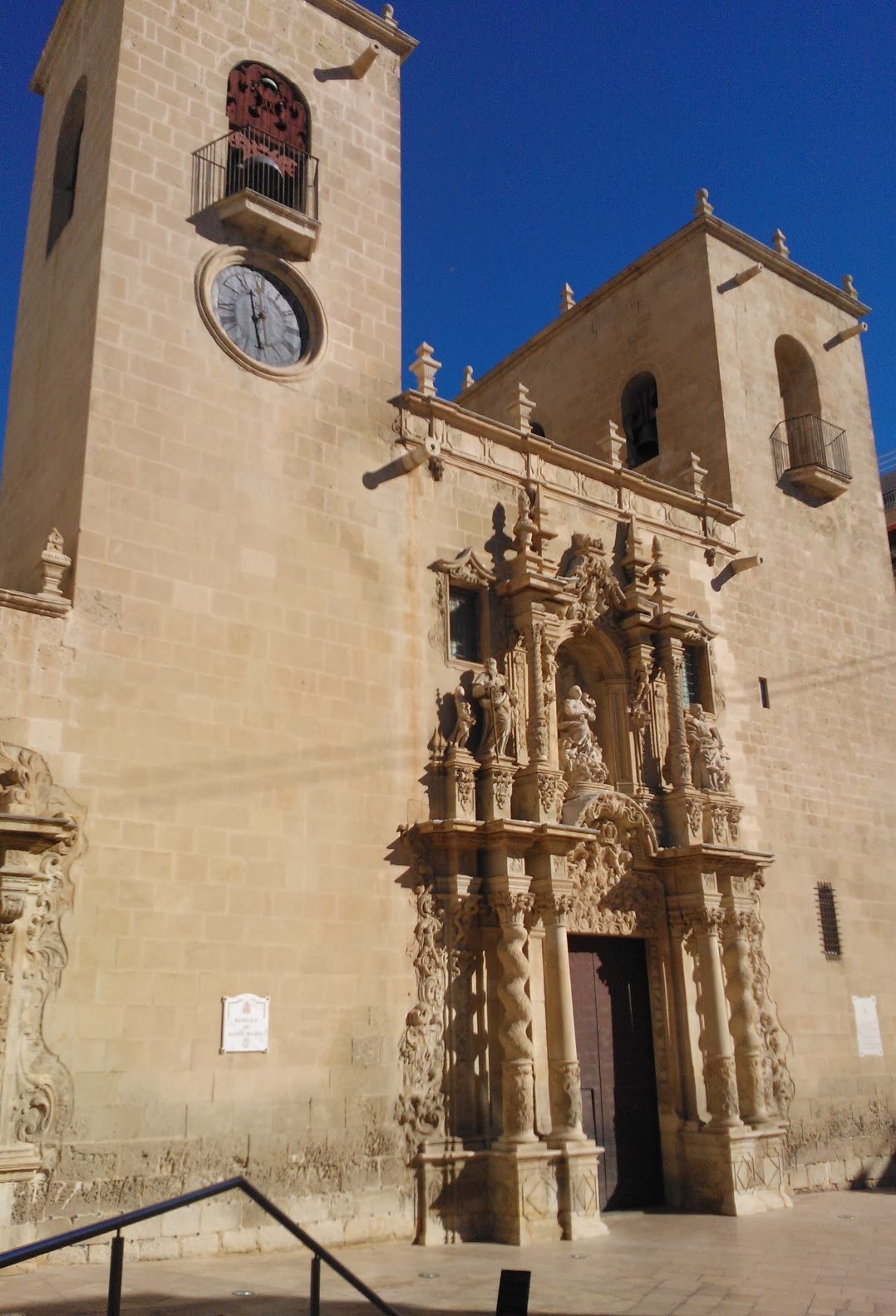 My husband was never an altar boy nor would he participate in the Holy chores the children in the Santa Maria Parish were obliged to undertake. As much as Father Gonzalo and Father Francisco tried to train him for the tasks and insist he attend catechism, he always found an excuse or disppeared hiding in another part of the church, mostly on the roof.  In the end they gave him other chores satisfied that he was at least there in the church.

During the 60s and under the yoke of the powerful Franco regime it was unthinkable that the children did not go to church and fulfil their obligations with the padres. At this time if they did not receive religious education and later take the first communion it could bring down real problems on the family labeling them as ROJOS (reds). You did not publicly announce yourself as an atheist during Francisco Franco's regime!

Although I have embellished my little tale somewhat it is a true story and it is how my husband told it to me. It was also verified by my mother-in-law and she told me Father Gonzalo came to visit her a few days later to tell her what her son had done. At the time he was duly punished and was house bound for a few days which was the worst punishment possible for a boy who ran wild like he did.
Although my husband has never been very religious he does have a fondness for the Santa Maria Chruch and we often walk that way and he tells me ancedotes about his adventures there. When we go in to visit, he shows me little corners ,nooks and recesses and what things were like before.
It fascinates me! 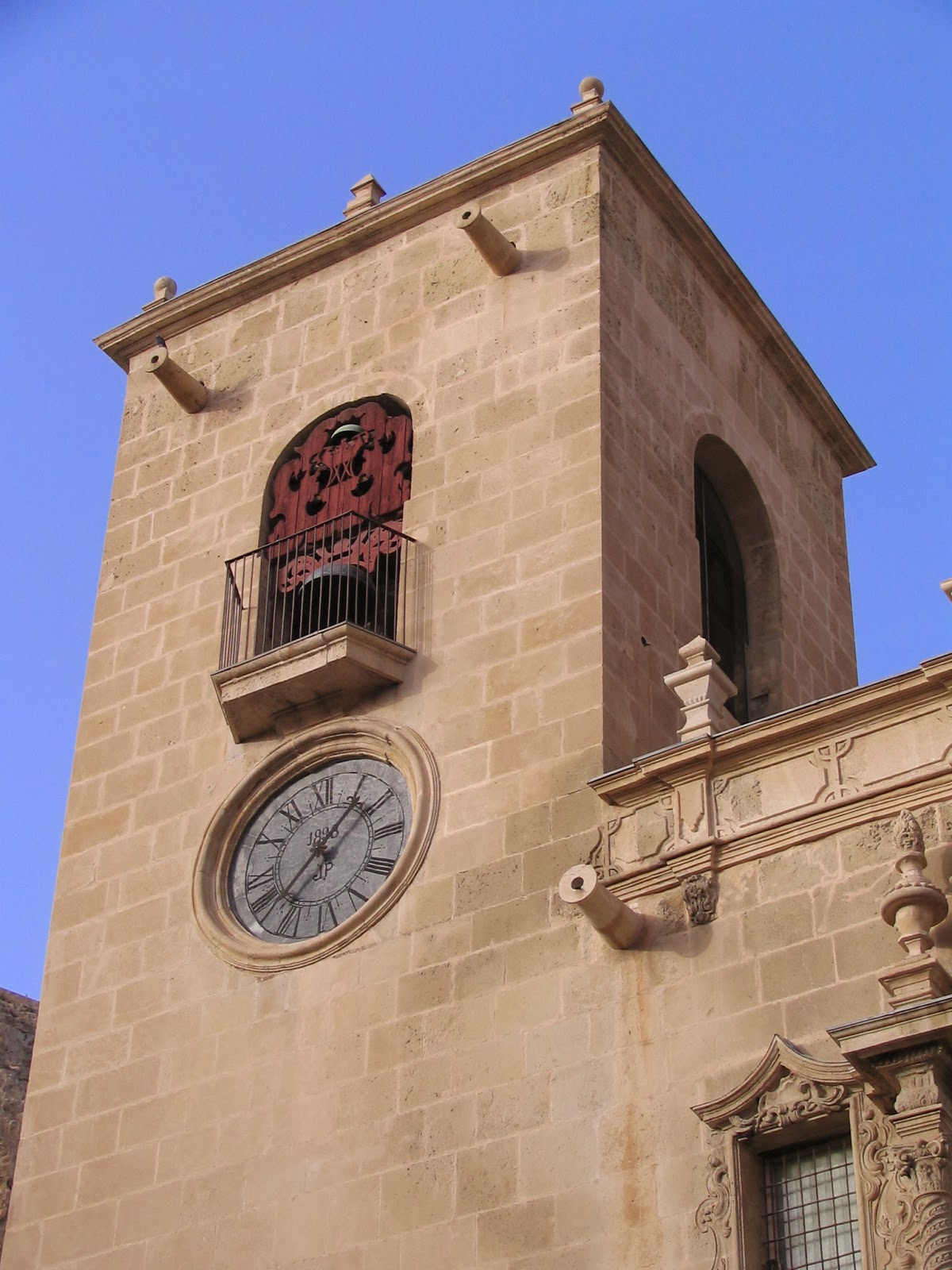 He speaks frequently of the tunnel that he longed to explore and never did and that it was sealed up not long after his last attempt to get down there. The tunnel actually connects with a tunnel within  the castle walls and was of course an escape route from the castle. There are tales of bodies being discovered down there, some dating back centuries some not so long ago;Civil War victims. There has been some talk of restoration but it seems it is in such a bad  state that it would cost a great deal. Others say that is an excuse and there are too many secrets down there and they are best left alone; buried and kept secret.

The Santa Maria Church dates back 1300.00 years or rather its beginnings does. It being the first place of worship built in Alicante. It was originally a mosque ,then a synagogue and then a church.


This is a 17th century print but it clearly shows the flat roof on the left and the drop onto the street which my husband used to use as a shortcut. In the 1960s that street on the left was much the same just narrower.

It is quite small but quite lovely inside: here you have a glimpse of the interior taken during my nephew's wedding in 2008 .....they were playing Pachelbel's Canon at the time I took this photo....it was an incredible moment;the acoustics in that church are phenomenal! 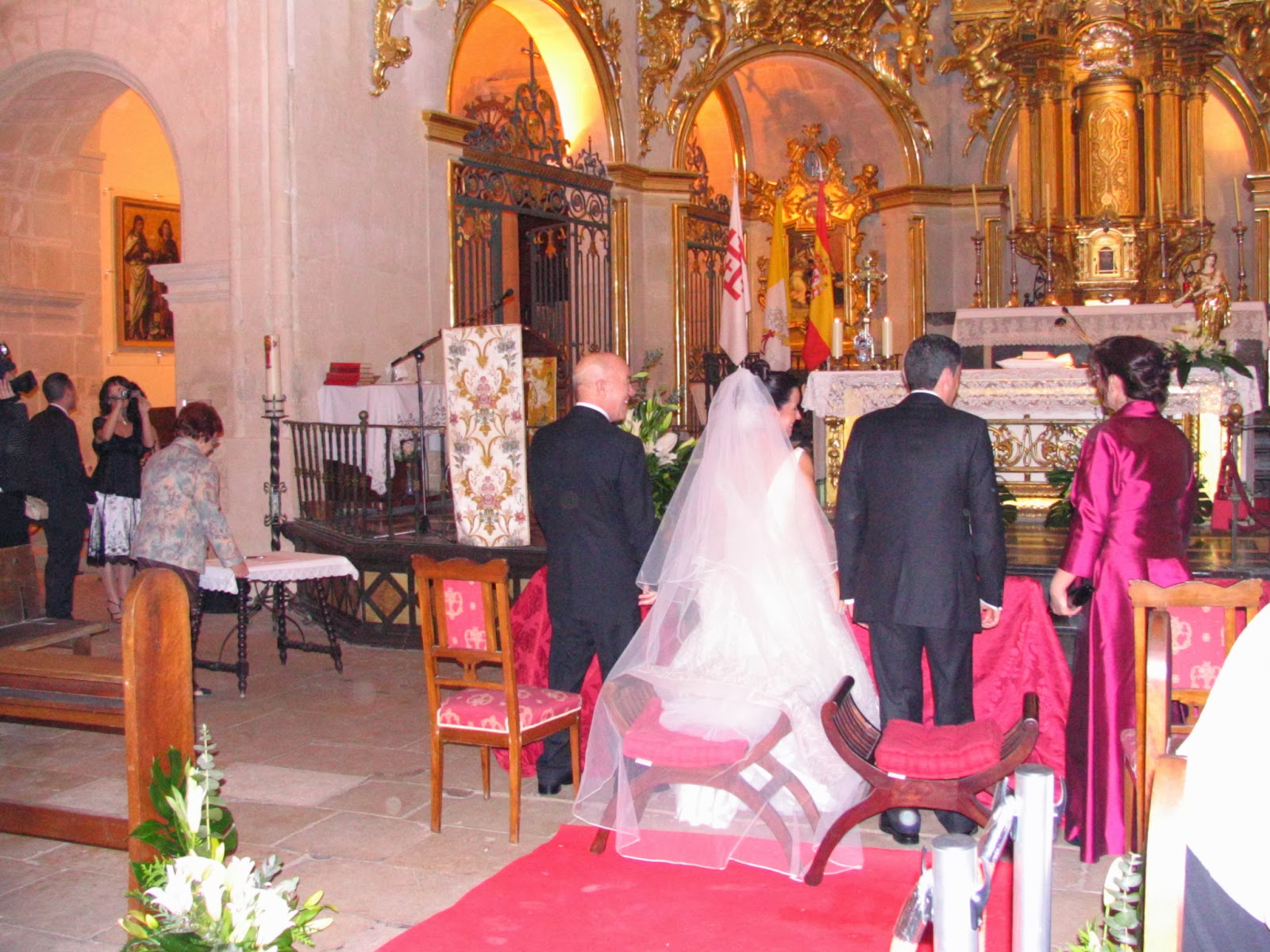 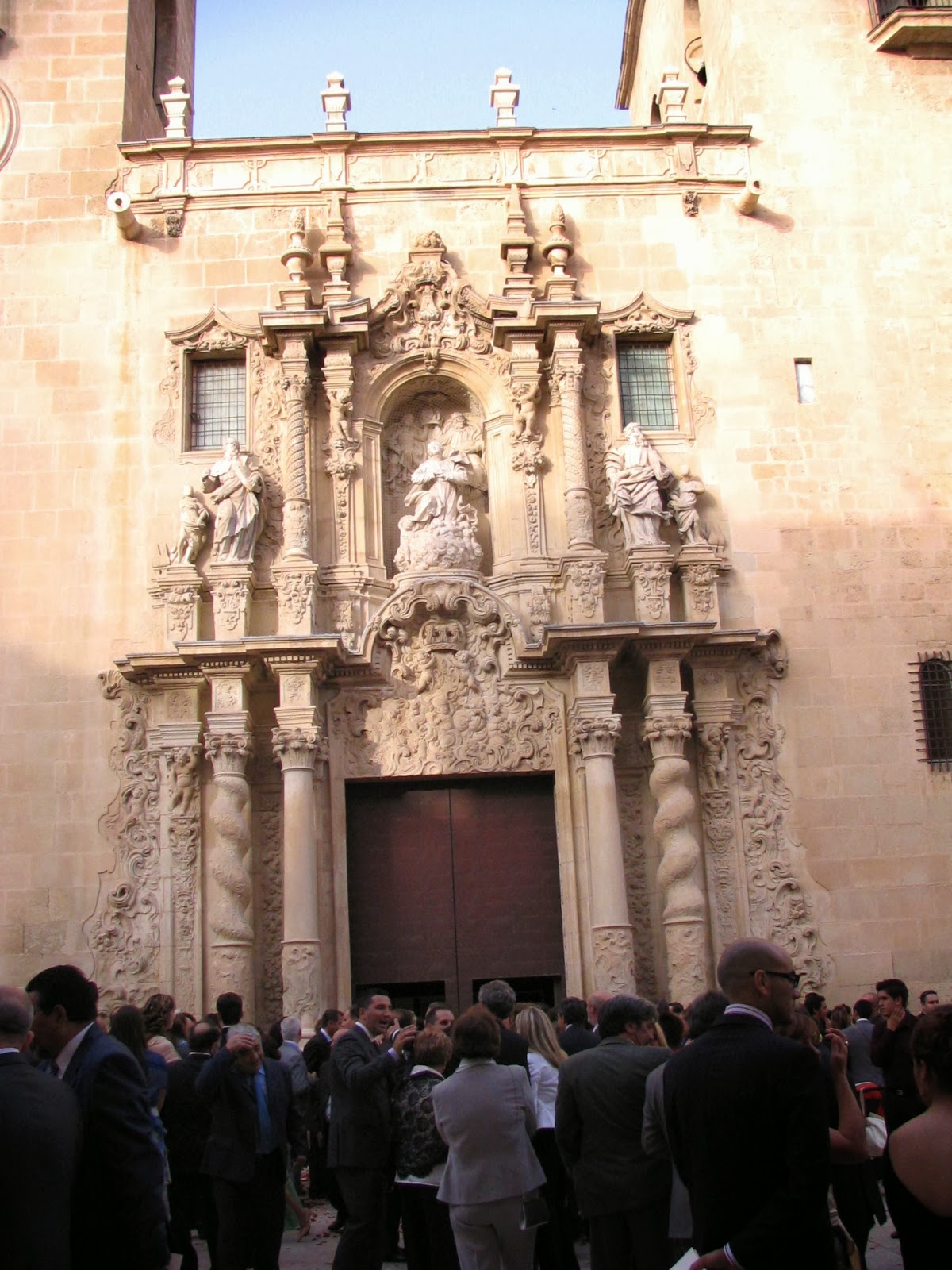 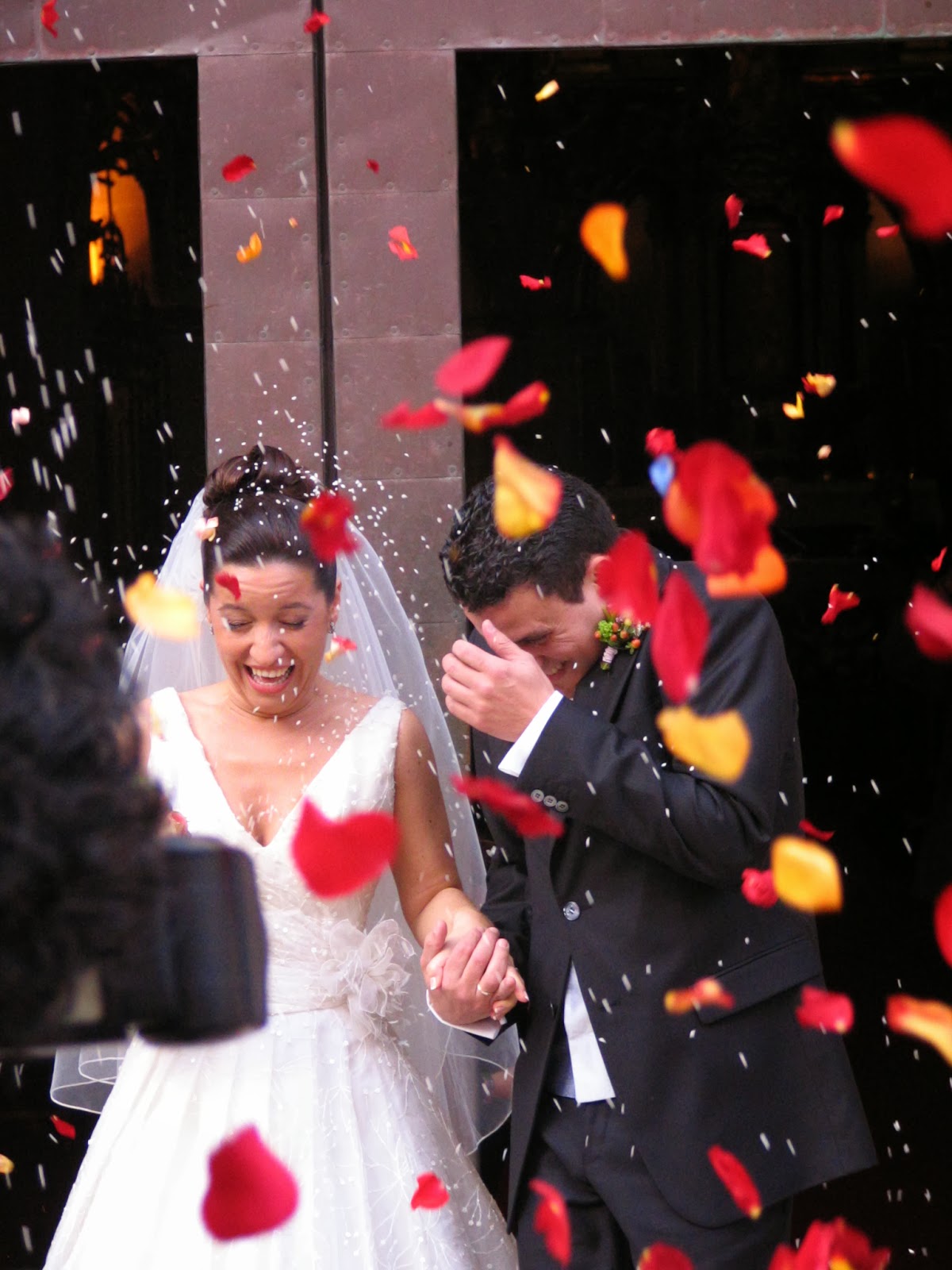 and they were duly bombarded with rice and rose petals

Well,my lovely bloggy friends do hope you enjoy this post :-)