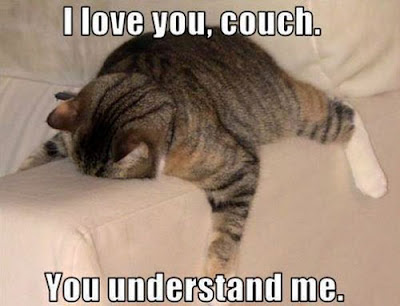 Alicante City is in fiestas until 25th June 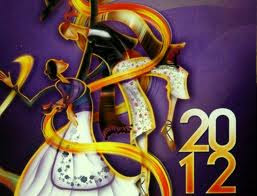 Las HOGUERAS DE SAN JUAN
The city is alive a round the clock.
The Saint John Bonfires are to celebrate the arrival of the summer and the whole festival pays tribute to fire.
How do I explain the fiestas......the Spanish love a good fiesta for sure... and what do they consider a good fiesta here in Alicante...well music...food...drink...lots of socializing and over five days .....oh yes and fireworks lots of lots of fireworks. They live the night during fiesta week .....a siesta is a must every day because they go to the numerous street parties during the night which do not finish until 5:00am approx and then after that its off to drink hot chocolate and churros.

The bonfires are made up of enormous cardboard and wooden figures which are quite comical ,made to portray good humour but you get a lot of political ridicule involved in the theme of each hoguera. They are real works of art and cost thousands of Euros. They are paid by the members of the different guilds throughout all the year. Sr P pays his monthly subscription of course for the one built by his neighbourhood guild, every Alicantino does to keep the tradition alive. 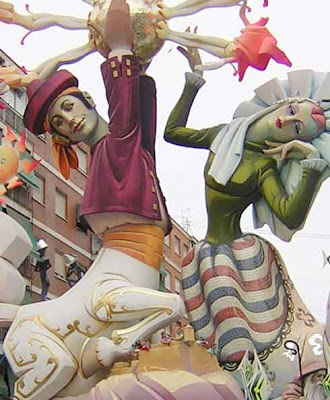 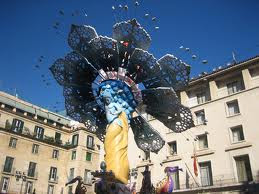 The Town Hall Bonfire always the first to be burnt.

The queen of the fiesta, known as the “Beauty of Fire”, is chosen in May from among the candidates presented by a committee in each neighbourhood.  On 21 June the parade of musical groups and the various bonfire committees takes place, with their respective “beauties” and the maids of honour dressed in traditional costumes. 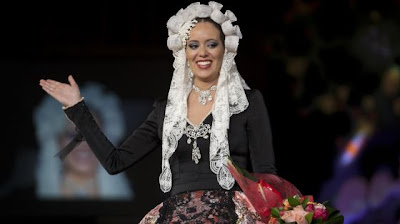 The Queen of the Fiesta


The following day there is a floral offering to the city’s patron saint, the Virgen del Remedio; and on 23 June there is the international folkloric dance parade, a colourful procession of dance troupes from all around the world.
In addition, every day at two in the afternoon from 20 to 24 June, there are firework displays in the Luceros square: the ear-splitting “mascletás”, which should be seen wearing ear-plugs because of the racket of the firecrackers and rockets. It is a racket too...but they love it. I've been once and that was enough for me...nearly suffocated on the smoke. And finally at midnight on 24 June is the “cremá” (burning), the high point of the fiestas. After a spectacular display of fireworks, the bonfires all over the city are set alight and blaze away amind a mass of people dancing and singing, while fire-fighters shower them with water in what is known as the “banyá”.

From 25 to 29 June there is a fireworks competition on the el Postiguet beach, and the historic centre of the town comes alive with a medieval market.Lots and lots of puppet shows and theatre performances in the parks for everyone especially for the children...and then I die of exhaustion while I float in the swimming pool!!!

Here is my granddaughter, participating in the procession presenting the floral offering  to the city's patron saint the Virgen del Remedio. 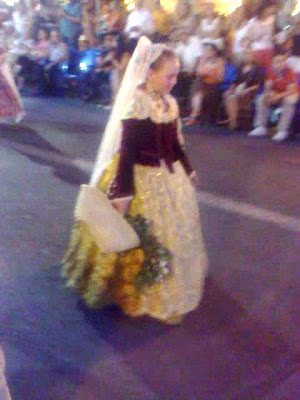 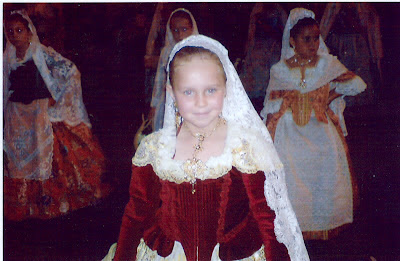 The dress is quite something.  Everyone buys their own costume but all the family help and every member has something stored away. I bought her bits and pieces towards it. The fan and the stockings which incidentally are white heavy wool stockings not socks but kept up with a garter ...in this heat... but the children put up with it ,they won't even consider being different. I suggested some cool light white tights but I was told "you don't understand Nana" ! 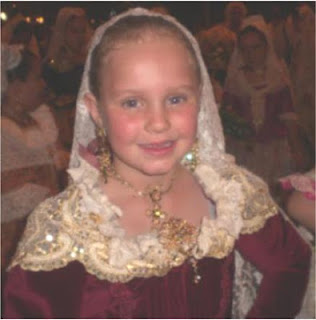 The necklace my grand-daughter is wearing was on loan from my daughter's Aunt and it goes straight back because it belongs in their family. 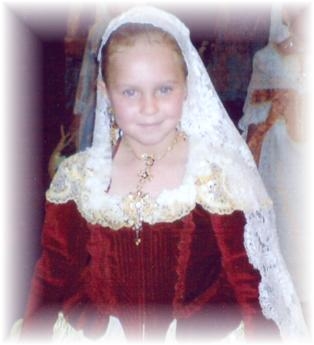 This is the photo I really like. They started at 7:00pm and did not finish parading until 11.30pm. Cookie baby was one exhausted but very very happy little girl.

Hello to my new follower Uma at Creative Mau ....pop in and visit whenever you like! :-)