Will an asteroid be named after me?

Lucky him! Adam Douglas the famous science fiction writer has had an asteroid named after him; Asteroid Douglasadams.

It has dawned on me recently, at my ripe old age, that it is highly unlikely that I'll ever be famous enough to get a rose,street ,planet or asteroid named after me!
However in the world of crochet and like so many other crocheters out there I can grab a tiny weeny snippet of recognition through my own designs as sparse as they maybe. As mentioned in my profile I have been crocheting for well over 40 years, and over that time I've occasionally made up my own patterns,some I have forgotten,nothing remains,no sample was kept,but some I do still have.
As is the case of this square and which I made up a new square into the cushion cover included in my giveaway.
This square has a tale to tell: 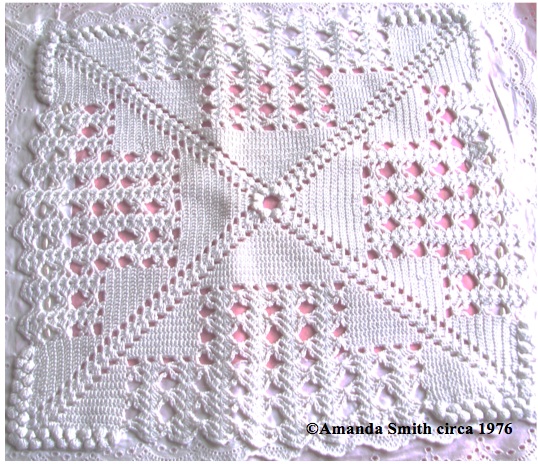 I've called it THE CANARIAN SQUARE

Having been married for just one year we moved to the Canary Island in 1973 to live, Las Palmas de Gran Canaria to be exact.
There's me with a six month old baby,no Spanish except, Hola, Adios and Gracias and Sr P away every day working. So I was on my own then...left to explore and being a very active,inquisitive bod and having never been one to loll around at home I did...little T in tow in her beach buggie pushchair ( I loved that buggie it lasted for ages).
One of the places I found was Parque Santa Catalina which was a bustling plaza near the beach where the locals went late afternoon to chat,sip cool drinks and watch the children play. 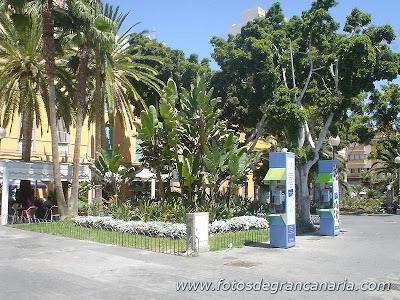 and also do this:

or very similar to this in fact it was a circle of elderly ladies some with their grandchildren with them,some dressed in black like this, but all of them doing crochet.
Need I go on??
The very next day I took my crochet with me to the plaza and sitting nearish to them, my daughter just beginning to walk (the Spanish are crazy about kiddies) and tutting over my crochet I somehow got involved.
Over the four years I lived in Las Palmas I learnt a lot from these ladies, to speak Spanish being one thing and a lot of lace crochet the other...they pinched my patterns and I pinched theirs.
It was here where new designs were created and where I created this one in particular.
So you could say crochet was the great communicator in this case as not one of these elderly ladies spoke English.
I thoroughly enjoyed my afternoons there at the plaza but they always seemed to be a little distant,nice but distant which I couldn't understand that is until my husband met me at the plaza after he had finished work and I introduced him to the ladies. The air seemed to clear after that and I was invited to their houses when the weather made it impossible to sit in the plaza.
Later on discussing it with my husband he suggested it might have been because they thought I was a single mother and that was frowned on considerably in the 70s.
That was approx 36 years ago so I imagine my Canarian square may very well have got caught up in the crochet network and have been copied by other people, which is just fine by me.
I shall be making up a pattern for it when I get down to making another one from my old sample. I am sure though many crocheters can make it up by just looking at this picture.
Having noticed the same on many other blogs I have today posted a copyright notice on my blog to protect my patterns and designs which I will eventually post about on my blog. However its mostly the same as what everyone else has indicated. I am happy for other people to use my designs/patterns as long as I am cited as the source likewise I am learning to do the same on my blog when using other people's patterns. 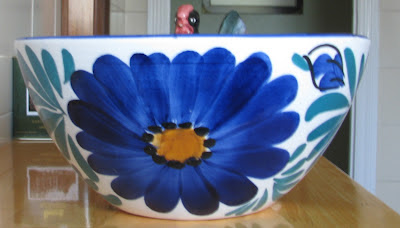 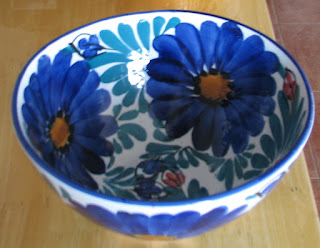 where I'll put all the names of the entries for the giveaway
however there is still some time left to enter if you haven't done so already (here )and it is open to everyone.

ALL IS NOT IDYLLIC IN THIS LAND OF SUN SOAKED BEACHES, SR P IS GOING THROUGH A GRUMPY PATCH AND THINKS THE GIVEAWAY IS SILLY (no comment)!
SO I SHALL BE USING THE RECENT DISCOVERED RANDOM NUMBER GENERATOR TO SELECT THE WINNER TOMORROW.

Pls see that you have a number or numbers assigned to you under each comment on the giveaway post.
A xx
My goal was 80 followers and I'm there
so I happily present to you my very First Giveaway


WHY DO WE PREFER CERTAIN COLOURS?

This photo was taken by a friend of mine in the Uk. Thanks SG :-)
I've posted this photo here for no particular reason except that I think its a fantastic snapshot of London today.

Email ThisBlogThis!Share to TwitterShare to FacebookShare to Pinterest
Labels: Copyright, own design, recognition