The stuff treasure is made of....

and I mean the real stuff...that glittery gold looking stuff!!! 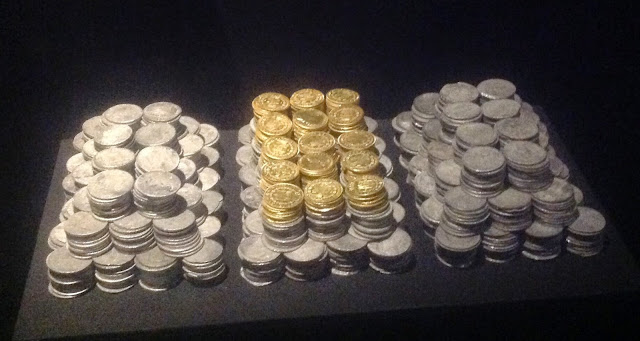 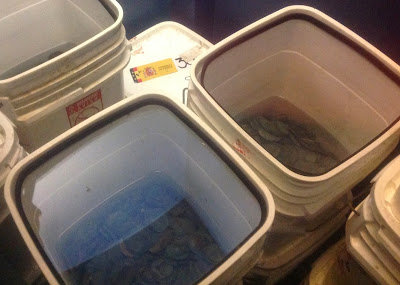 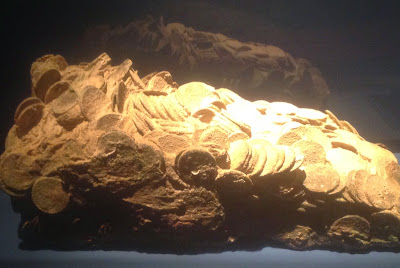 The last voyage of the frigate Our Lady of Mercy or Nuestra Señora de las Mercedes exhibition in the Marq Museum,Alicante. 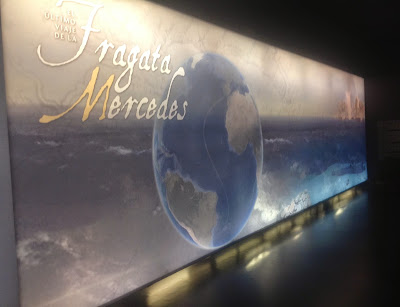 I had been waiting eagerly for this exhibition to arrive here in Alicante!
I have been following the discovery of the Mercedes and its treasure,the lawsuit proceedings and the final success of the Spanish authorities in winning the lawsuit against Odyssey Marine Exploration, for several years.
Finally after a long wait and after touring many of the major cities in Spain this exhibition arrived here in Alicante and Friday, May Day, being a fiesta day was perfect for us to go and see it. 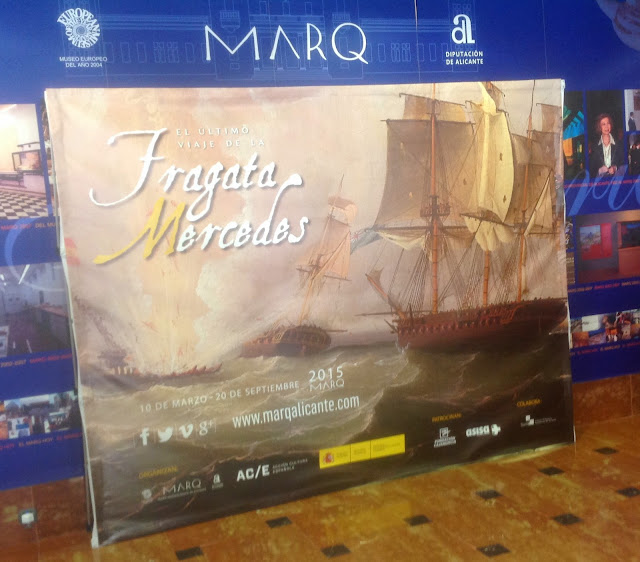 This is a story of greed and plunder both latter-day and in the past, as described in this extract:

The Spanish frigates – Medea, Mercedes, Fama and Clara – laden with bullion for the Spanish crown, under the command of the expert seaman Don José Bustamante, were sailing from Montevideo to the coasts of Cadiz. They were intercepted and attacked off Cape St Vincent, south of Portugal, by four English frigates which, despite the existing peace treaties between the two nations, were lying in wait for them to prevent the riches from falling into the hands of Napoleon, their most feared enemy. When the Spanish commanders refused to accompany them to any non-Spanish port, Sir Graham Moore launched the attack, with barely any time to negotiate and seek an alternative that did not involve bloodshed. During the unexpected combat the Spanish frigate Nuestra Señora de las Mercedes violently exploded and instantly sank. Two hundred and sixty-three people died in the explosion or subsequently drowned. The loss of this frigate, which was carrying many passengers – among them the wife and children of the second-in-command, Don Diego Alvear – swung the combat in favour of the English ships, which eventually captured the three Spanish frigates and escorted them under arrest to Great Britain.

Two hundred and three years on from this historic event, which led directly to the declaration of war on England that December, the ‘treasure hunting’ firm Odyssey Marine Exploration located and plundered part of this frigate’s cargo, illegally transporting it to Tampa (Florida) in 2007. More than 500,000 silver and gold coins, in addition to a few remains of objects belonging to the crew, make up the rich archaeological treasure extracted from the sunken wreck that lay at a depth of 1,500 metres beneath the sea. This gave rise to a lengthy lawsuit in which the US courts finally ruled in favour of the Spanish state, acknowledging its rights to these assets and ordering their immediate return to Spain. The case sets an important international precedent in the defence of Underwater Archaeological Heritage.

The main purpose of the exhibition is to make these assets known and available to society as part of a heritage that belongs to it. The exhibition project aims to go beyond the economic worth of the coins extracted by conveying the cultural values of these objects, which are protected by law as part of Spain’s Historic Heritage. 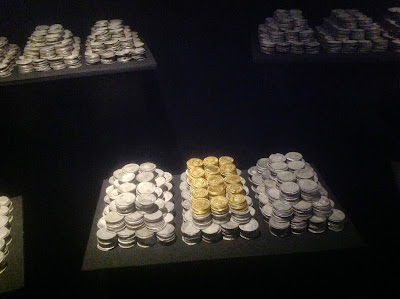 Although I knew that the treasure itself mainly consisted of a very large amount of silver and gold coins I still looked for and found no evidence of the mundane archaeological items that are usually found and displayed from a shipwreck such as personal items or nautical remains. However except for a gold rape box, part of a silver fork, and one gold cufflink there were none.
I admit to being quite surprised by this until I read the following: 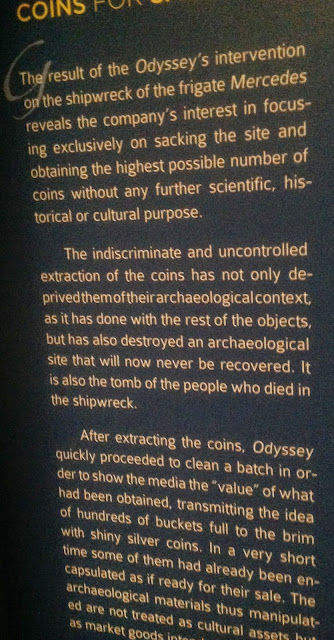 situated near the exit at the end of the exhibition.

A brilliantly presented exhibition which I'd recommend to anyone who is visiting Alicante.

I am indeed thankful that the Spanish State won the lawsuit otherwise I and others would have never had the opportunity to learn about and see this impressive treasure and also understand the importance of protecting the Archaeological Heritage of every country in the world so we may all enjoy and understand our past.


In the hands of Odyssey everything would have gone to the highest bidder and private collections!!! 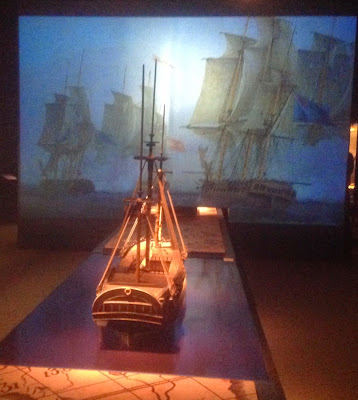 Email ThisBlogThis!Share to TwitterShare to FacebookShare to Pinterest
Labels: Treasure from a shipwreck