I so love Orchids...pretty sure I have said that before... but I do! 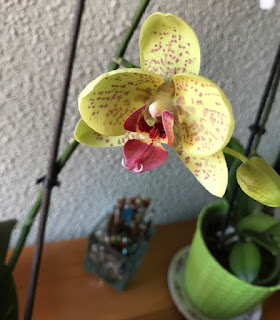 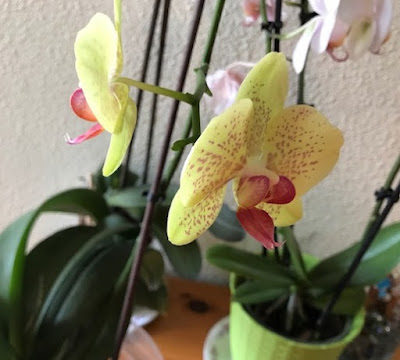 At the beginning of last month we went on our outing as usual on the Sunday but our final destination was quite an impulsive decision. In other words not planned and we didn't have much of an idea where it was.

Sr P remembered this lake he had been to when he was a young man with a group of friends of his. He must have been talking about way back in the 60s when he last went there and I was very doubtful if we would find it or if there was any access to it now. This sort of thing has happened before you know!  Sr P isn't into organising outings very much he is very spontaneous.. he will often say  I remember this place or someone told me , it must be near or I'll ask when we get there!  If I know where we are going I check it out before hand and look at what's there and the different routes to get there. It is much quicker that way. Many is the time we have gone round and round looking for a place Sr P had heard of but doesn't really know how to get there. We both only end up getting irritated and annoyed if we can't find it!

He only just mentioned it this time when we were en route to go to the salt lakes in Santa Pola which was our original destination that day. Halfway there he says " ... afterwards we can continue on to Torrevieja to the La Mata Lake and have a walk around it" My question was "What and where is that?"  really to get information and details out of my dearly beloved about the Mata Lake was like getting blood from a stone. Needless to say after numerous questions I still had no idea where this lake was situated.  Siri on my iPhone didn't help either. I gathered from Sr P, the temp tourist guide, that was just after arriving into Torrevieja on your right but there are dozens of right turnings off from the motorway as you enter Torrevieja . 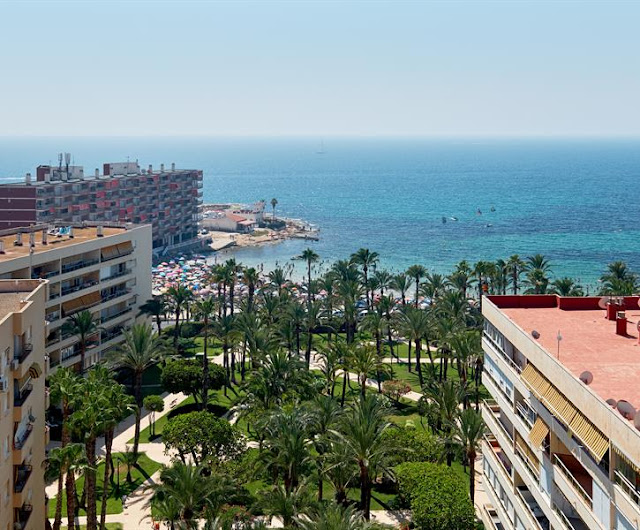 This is Torrevieja a very popular tourist resort.

“Begin at the beginning," the King said, very gravely, "and go on till you come to the end: then stop.” Alice in Wonderland by Lewis Carroll

Exactly that would be best!

Santa Pola another tourist resort is a small coastal town about 25 minutes by car from Alicante City.

As mentioned previously our initial objective was to go to the salt lakes to see the Flamingos. Although the flamingos are there all year round in those wetlands you don't always get to see them near to the shore or flying. I have only seen a pink cloud of flamingos flying overhead once in all the time I have lived in Alicante and it is a very pretty sight.  This is why we occasionally go that way to see if we are lucky and catch a glance of them.   This time we weren't but I did take a few photos.

At one time this part of the coast was constantly besieged by Barbary pirates.

We stopped there for a little while but it is on the main road so it isn't easy to park. Just had time to take this snapshot.  We decided to continue on and look for the lake.

As we were driving,along the motorway into Torrevieja, I was having a good old grumble under my breath outlined with a tut or two about where the entrance to this supposedly interesting lake was situated.   Lo and behold and with a highly emphasised told you so from Sr P  I saw a sign on the right indicating LA MATA, practically straight away which made me swallow my mumbled protests rather rapidly.  I knew though I wasn't going to hear the last of this!

As we drove along the rather dusty path towards the lake that I could now see in the distance we saw a sign indicating La Mata Lake Information Centre. In other words it had not disappeared in the aeons of time as I had suspected. In fact it has become a National Park and the local authorities have opened it up to the public offering different types of footpaths and bicycle paths, a  picnic area and some lovely views with lots of interesting notices along the way about the fauna and the aquatic birds that inhabit the lake.

This was a totally different type of landscape than beach,city or mountains which I usually post about here. These are the low lands, the Vega Baja del Segura and the Park footpaths ran beside several vineyards. 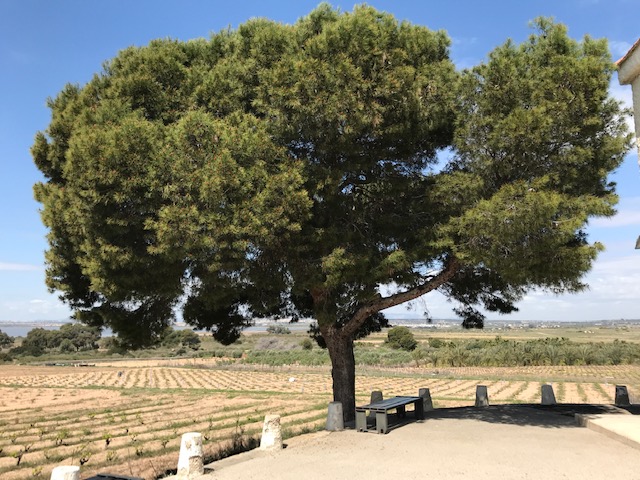 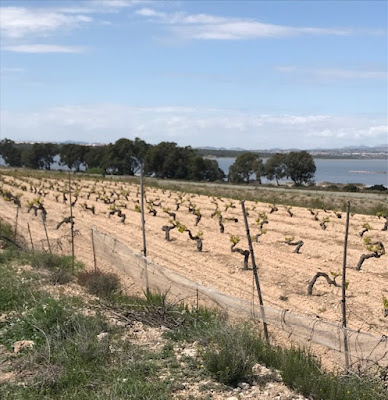 The grapes from these vineyards are mostly used for making Muscatel,sweet white wine.

However I also saw the odd fig tree and it was laden with fruit. 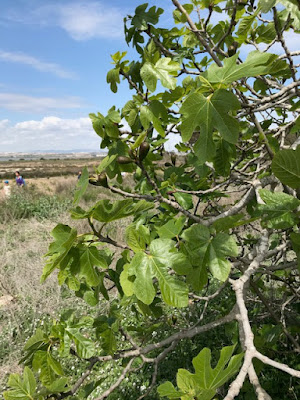 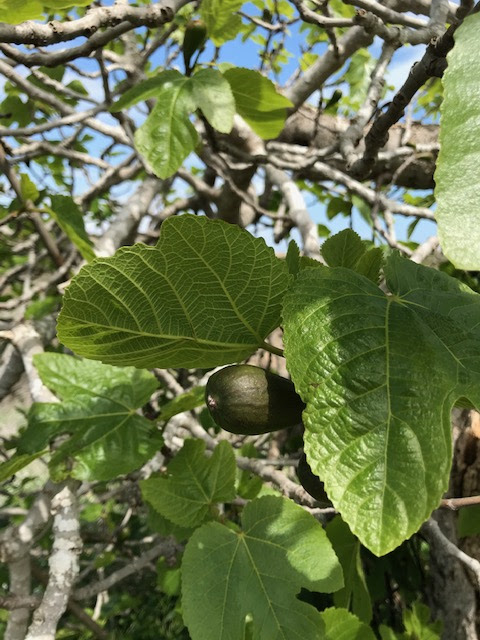 It was a somewhat dusty walk and quite warm. I couldn't see myself coming here in July or August; far,far too hot.  Nevertheless this landscape has its own beauty! 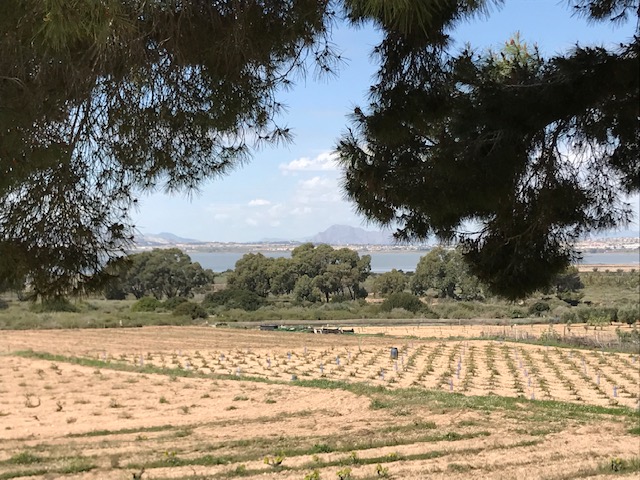 I'd come back for sure. There was another footpath we did not explore which goes around the other side of the lake. I'd like to go on that one but next time and better prepared with a good sun hat.

We usually make lunch together but I decided I would prepare lunch for us when we got home as I felt I had to make amends for being so grumpy earlier on. 😁

I am pleased to add that after a week of chasing up the home insurance company the mess I mentioned about in my last post was cleared up and nice new matching tiles have been put in place. 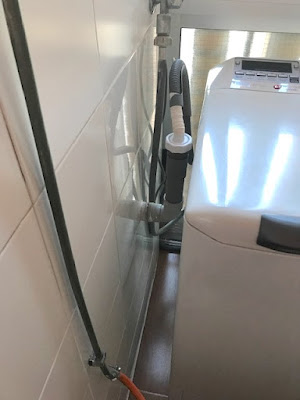 I thought that was all sorted but now it looks like the water heater is on the blink.. tch! If it isn't one thing its another ! I must admit though it is old 😳