I don't very much like the way some people use this term as if it stretches the limits of family relations.

Some would say too extended perhaps and that my sister's great grandchildren are no relations of mine.  My nephew is their grandfather and my great niece is their mother and that is family to me! After all they have the same blood line! Anyhoo I don't want that to be like that so I call them all nieces and nephews .😁

My great niece who lives in Devon has granted me permission to post these gorgeous photographs of my nieces and nephew. 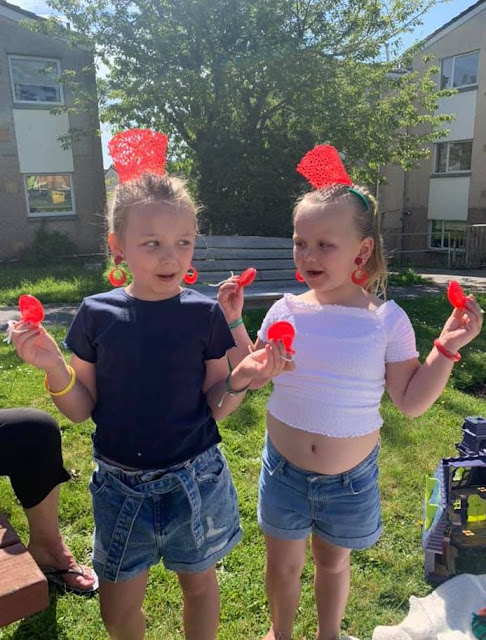 These two pretties are my nieces, Edith on the left and Lottie on the right,who I haven't met yet except on video chat, which isn't quite the same.

It was good to see in the photographs that the little something that I had sent over to the two girls was also enjoyed by their younger brother too.  Here you see them dressing up with the contents of a couple of  typical Spanish souvenir packs containing castanets (castanuelas),hair combs (peinetas), colourful bangles (pulseras) and the typical earrings. 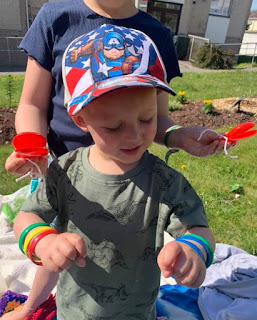 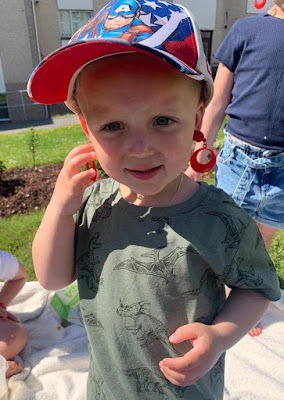 They are the little 'uns that I made these shawls/blankets for before they were born: 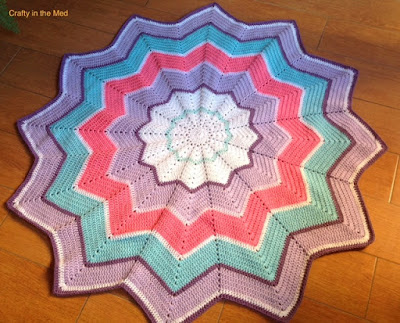 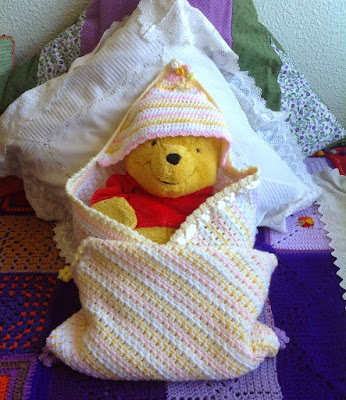 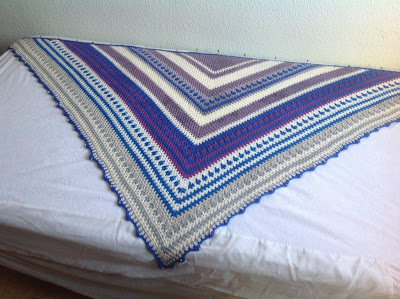 Which brings to mind the saying "Time flies" or if you prefer the original latin version "Tempus Fugit". Children grow amazingly quick!   I so hope I am going to get to see them before they get much older.

I have a Castle in Spain

Do you know when Sr P and I  were courting he told me he had a castle in Spain!

Naturally I thought he was joking however he was so insistent and got so offended when I scoffed at him that I finally believed him...sort of. There was a split second there when I went into imagination overload and thought perhaps his family were impoverished aristocrats and there were a  few stones from the ruin of an ancestral home on the land he also told me he had. Lucidity hit in after a few seconds of those imaginative thoughts and all this was pushed to one side as we went about our romance.

It wasn't until 1973 after the birth of my daughter that I went to Alicante to be presented to the family that I thought those possessions, that he said were his, would come to light. As I didn't speak a word of Spanish then I couldn't ask the family about the castle,the land,and the orange groves and the yacht. Yes, Sr P had added to more to his list!  Nevertheless, I was determined to get to the bottom of all this, so I kept on at Sr P about it.  I am sure you will have guessed by now about the castle and at that time I suspected he was talking about St. Barbara Castle which overlooks the city, but there was a little bit of a niggling thought that he might just take me to those ruins of an ancestral home. I was still holding out hope!

Sorry to disappoint but as suspected the castle he had been talking about all those years was St Barbara Castle and that first day he took me up there he showed me the plaque which was engraved with something along the lines of it is dedicated to all Alicantinos.  Tch! 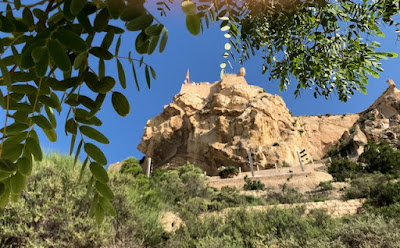 I then went after his yacht so he took me down to an obscure part of the port and told me to look down into the water and asked me what I could see and yes I could see the wreck of a small boat under the water ...I repeat "boat". I asked him where was the yacht and he said casually that it was a linguistic mistake as he didn't know how to say fishing boat in English at the time. It seems said boat had been his grandfather 's.

By then I was quite annoyed and mostly so because I had been taken for a ride and also I was cursing myself for being so naive!  At least the land and orange groves did exist but they belonged to his father and not to him!

From that moment on I realised my husband loved to tease and joke! I eventually found out how to detect when he was joking/teasing as he can keep a very straight face but his eyes betray him. He smiles with his eyes!   Since then this anecdote has become a family joke and it is frequently repeated as a conversation piece especially during the big summer barbecues we have here in the garden and at the end of the meal when everyone is feeling very relaxed and sipping sweet sparkling cava. 🍸🍹🍷🍸

I have tried to take snapshots of places and corners within the castle grounds that are hidden away. Ones that don't often appear in the typical snapshots I usually take of the Castle,sorry Fort as Sr P keeps telling me off about this, even though everyone here calls it the Castillo or just Santa Barbara. 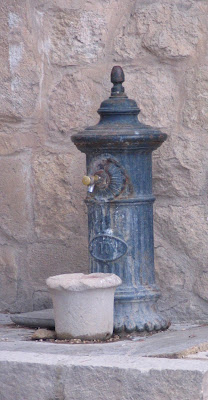 About the only old public drinking fountain that has survived the rest are modern box like things that just do not fit in but I suppose are more hygienic. 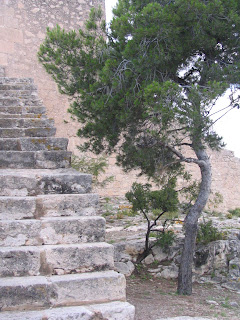 The guardsmen must have been very fit having to climb these stairs umpteen times a day to get to the battlements. 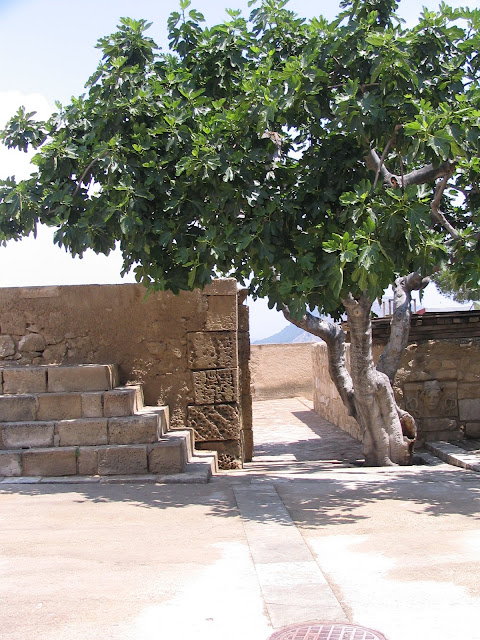 Nice big fig tree which offers a little bit of shade conveniently over the steps and wall walk. 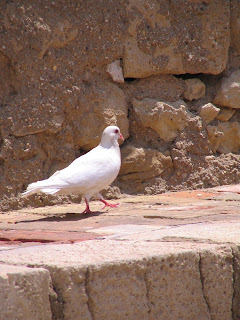 The old prickly pear cactus bush that has been there for ever practically. Sr P says he remembers it was there when he was a boy that would be about 68 years ago. I see they have a sign up asking people not to engrave their initials on any part of the bush!   Really! get a tattoo if you love initials so much ! 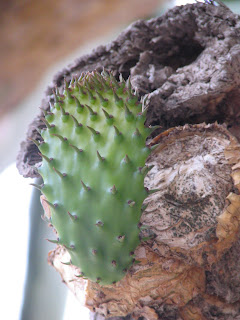 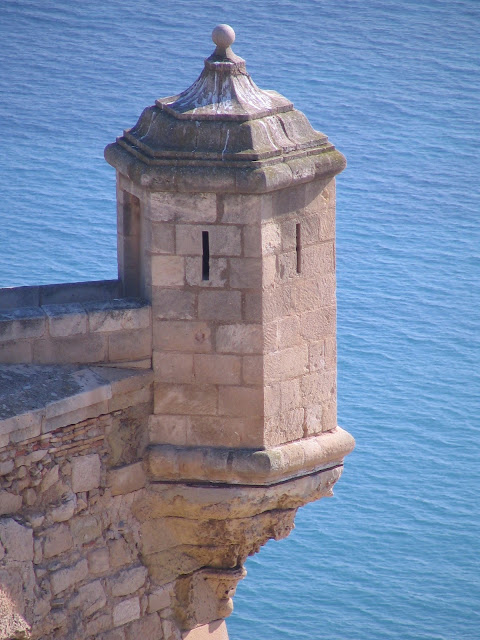 That contrast of the guard turret against the Mediterranean blue,that I always find so stunning. They could certainly see the pirates arriving from here...such a clear view.

Hope you have good days ahead and happy blogging