Gratitude is the completion of thankfulness

Indeed I do...feel gratitude that is!   I just feel I need to say thank you for your blog friendship! You may say "Why?"  How can I describe it I'd say it produces a feeling of belonging! I had this feeling in blogland before but being away from my blog for so long I lost it!  I am feeling it again and it is so good that I have found it!  When I receive comments on my blog or of course replies to comments I have posted or see my blog there in your blog roll I feel I am belonging . Perhaps I can simplify what I am trying to say.  It is a good sensation and it makes me happy.

Checking the mountains are still there!

When the heat here in Alicante decreases and Autumn starts to bring in the cooler weather we usually take more Sunday trips up into the mountains. We start this usually at the beginning of November but Sr P has had some ear trouble recently, He is is on the mend but meanwhile he isn't allowed to go snorkeling or swimming so the beach is off limits for a little while. As we have had some showers this last week we thought we go and check out one of our favourite places in the mountains which is not too far away from the city. 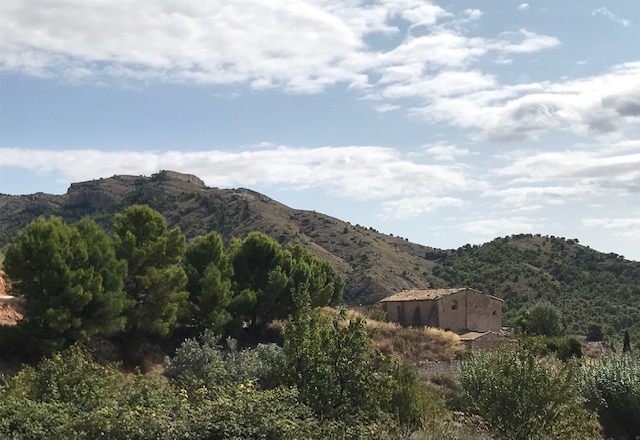 I t was really good to see that the countryside was not looking so dry and parched. The recent rains had brought back some colour to the terrain.  I took this photo on our way up to the Maigmó Greenway  (Via Verde) in the Maigmó mountains. The Greenway was originally a railway track from Alicante to Alcoy that was built in the 1920s which never actually entered into service.    The track has been reconditioned into a public trail for hikers and cyclists and covers approximately 22 kilometres from Agost  up to the Maigmó pass and back down the other side of the mountain. 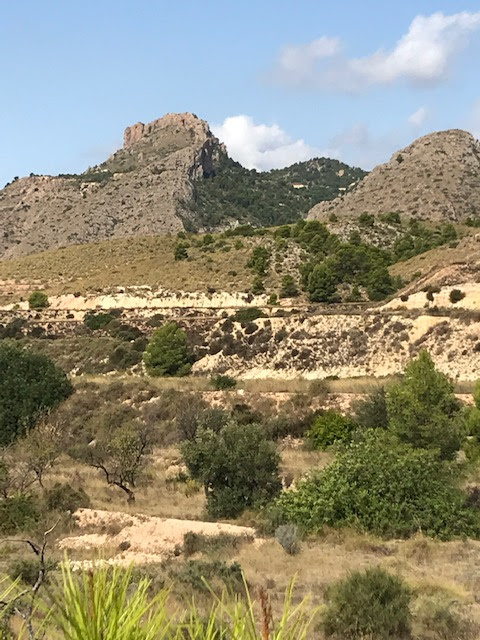 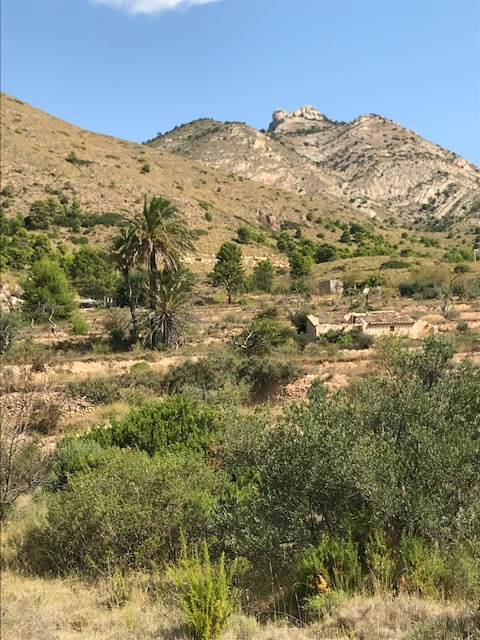 Our objective was not to walk the Greenway this time but to walk along the Drovers trail under the old railway bridge(now part of the Greenway) which borders some olive and almond fields on the slopes of the mountain croplands.  Our goal.....ALMONDS!!  Unfortunately the almond harvesting was at the beginning of September and if you want to pick windfalls one needs to be here at least two days after the harvest so we are a bit late and consequently there were not a lot of windfalls.

One should not stray from the Drovers trail at all and cannot enter the fields and pick from the trees as they are  private property even though there are no fences. It would be considered stealing!  Nonetheless, there is a rogue almond tree on the pathway which is fair game and there are always some windfalls too.     We only take sufficient to have a little snack and at times Sr P carries a bota de vino with him to have a swig of wine as we munch the almonds!! 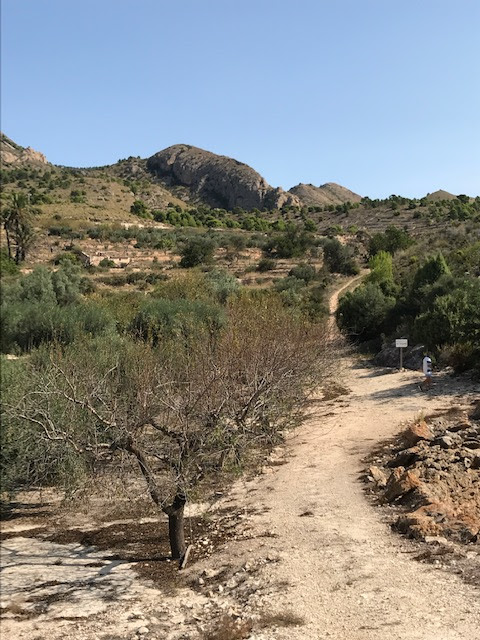 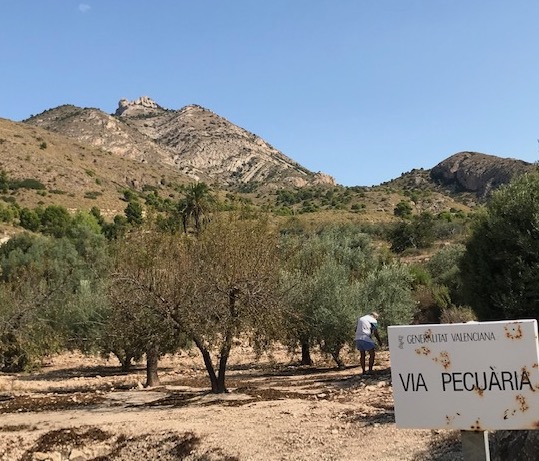 That is Sr P picking up the windfalls. He is right on the edge of the trail....tch!!! The rogue almond tree on the right has been picked clean. However we picked up enough for a snack and a few to take home to make up almond sauce to add to a chicken dish. 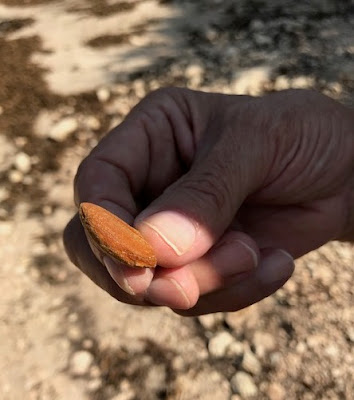 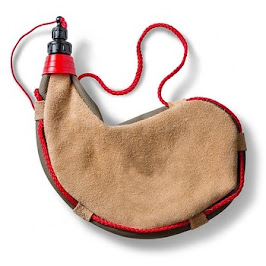 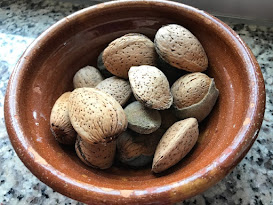 Now I have to talk about being naughty...

.....not totally my fault by the way because this Miss has been messing about with that magical stuff she sprinkles around .......    I was so tempted when I saw these at half price I had to buy them.... 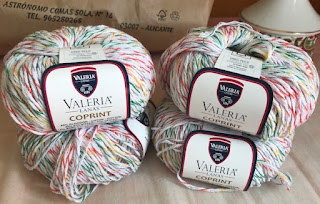 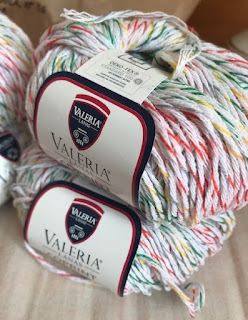 By the way I still go to the local haberdashery which I posted about in 2012 (doesn't seem that long ago!) and you can read about it here . I am trying to frequent more the small local shops who are having such a difficult time!
RAOCKs:
I made this in April during lockdown for the Random Acts of Crochet Kindness group. I used a free pattern I found on the webpage Thoresby Cottage.   I did tweak it a bit!  Great stash buster! 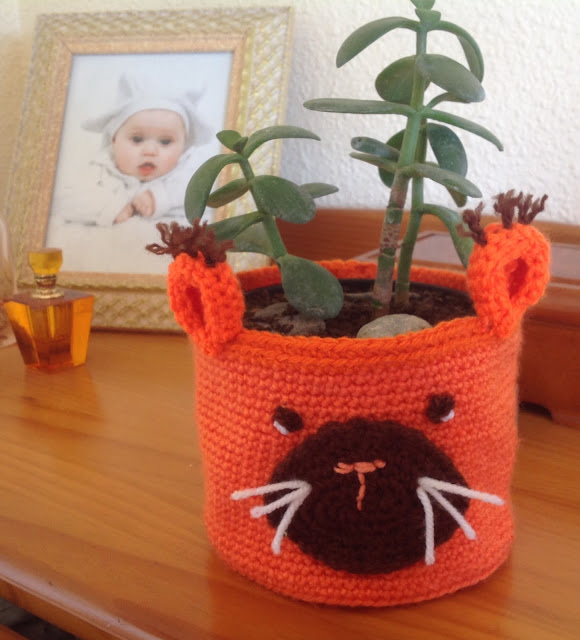 Email ThisBlogThis!Share to TwitterShare to FacebookShare to Pinterest
Labels: almonds, Mountains, Thanks, Yarn.