This doesn't mean I didn't rush out my front door like a bat out of hell as soon as I heard the Ice-cream man jingle when I was a child...of course I did but I would usually buy a lolly more than ice-cream. Having said that and giving it a thought maybe I always bought a lolly because I didn't have enough money to buy an ice-cream!

We were given a few pennies to buy ice-cream from the ice-cream man only on Sundays. I just didn't understand it at the time because my friend would get ice-cream on Fridays and Saturdays too but we were only allowed on Sundays. As I got older I understood why and it is a pretty simple reason! In those days when you had 6 children you couldn't treat them to ice-cream, more than once week!

Nevertheless ice-cream doesn't thrill me much!  The majority of the time when we go out for a meal here the dessert is a selection of ice-creams or ice-cream accompanied by something so I rarely have dessert.  This is ice-cream country and the local ice-cream made in the mountain town of Jijona is very popular.

Jijona is famous worldwide for its Turron/almond nougat but locally it is also extremely well know for its ice-cream too. There are no end of ice-cream parlours that sell Jijona ice-cream throughout the city and I sometimes go and buy for Sr P who certainly loves it. This type of ice-cream always reminds me of the Italian type of ice-cream which I remember trying in London but I was not impressed with it at all. There are endless amount of flavours some quite strange.   Unfortunately I am just not keen at all.  Far too sweet for me! 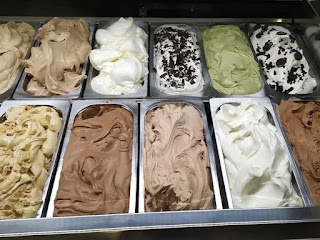 There is an exception though to this dislike of ice-cream and I would go out of my way to get one of these. It is in fact the only ice-cream I would eat with relish. 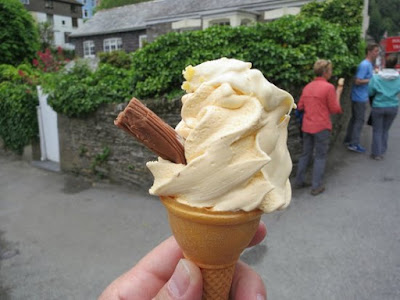 I believe you may not of heard of this particular ice-cream over there in the States, in case you haven't allow me to describe it.   The best is local soft Cornish ice-cream made with Cornish Clotted Cream with a Cadbury's chocolate flake inserted into it. Everyone has their own particular way of eating their 99. I like to push the flake right down into the bottom of the cone (carefully done as the cone could crack) eat the ice cream until there is only what is left in the bottom of the cone and then crunch on the chocolate,ice-cream and cone together!             What else can I say except  mmmm...yummy!

I had a request from my niece in Nelson,New Zealand who asked me if I could crochet this sweater for her 18 month old daughter, Arabella (just love her name).

I have actually never crocheted a jumper before! There is no particular reason why except I think perhaps it is because I have never been asked to make one. I wasn't worried about that at all! I just needed a pattern.  However easier said than done! We couldn't find the pattern for this jumper and there were three of us hunting for it online, me, my sister and my niece. Finally I sent my niece a few baby sweater patterns and asked her to choose one of those and although it wouldn't be the same I promised I would make it as colourful as the jumper she wanted. 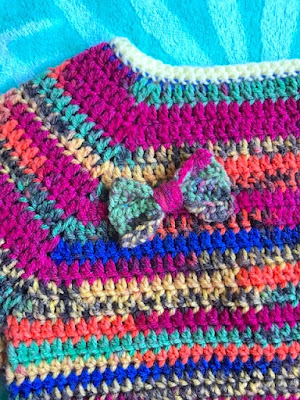 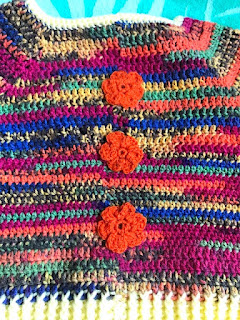 I managed to use yarn from my stash. I felt very good about this and quite proud of myself that I was able to resist the temptation of buying a new batch of yarn just for the jumper. I used DK yarn and hooks 3,5 and 3,00. The pattern is a free pattern from Yarnspirations. 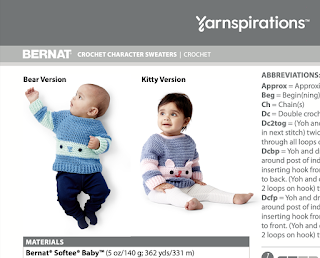 I did tweak this pattern a little bit :-)

A nice cuddly warm jumper to keep a pretty babe lovely and snug. As I am sure you know it is winter in New Zealand at present. 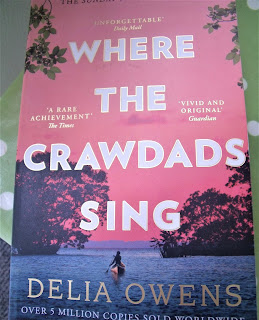 I have just started this book and time will tell but it looks as if it is going to be a good read as from the very beginning it has piqued my curiosity. A good start.

This was a recommendation given on one of the blogs that I follow unfortunately I cannot remember exactly whose blog. I took a screenshot of the book at the time and put it on my desktop thinking to check out it out later on and purchase it. That was last month or the end of May.  I think it was either Radka on My Stitching or other journeys or Marlene on Poppy Patchwork where I saw it!  Anyhow, many thanks for sharing.

Happy blogging to you all