As I mentioned over Christmas I am going to do my best to keep up with blogging  even if it means writing very sketchy posts  and even while I've been feeling poorly    )-:


Yes I've been pretty well hugging the loo lots over the last 48 hours and not because I have been on the bottle but due to a nasty virus which I have picked up somehow!  It has left me totally drained but that doesn't matter because I think the worst is over. It was getting to the point that my loo seemed miles away every time I tried to get there on time just like those grotty outdoors loos used way back when I was a child. 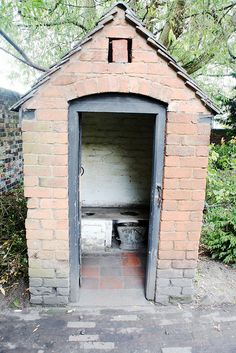 I shudder when I remember it!!!
We had to go out in the freezing cold with a torch and crunched ourselves up shivering while we did our business, warily flashing the torch around as if we could ward off the weird shadows with its beam and the closed door being our only protection;shadows that seemed like ghostly beings coming to grab us off the loo!
Each noise and each rustle of branches or bushes coming from the garden that we could hear was a monster which would grab our ankles from under the door.
As for getting back in the house that was when feet sprouted wings ,no matter if a slipper got left behind or knickers were flapping around ones ankles the objective was to get in the house quick before the toilet grabbers could get you!!!!!!

Ahhhh! some would say those were the days!!!!

It was total paradise when the annex was finally built and we had an indoor bathroom and toilet ........pure luxury :-)