I went down to the market the other day,nice an early before the heat strikes, as I wanted to buy some cool summer slacks for my sister to send to Devon in the UK. 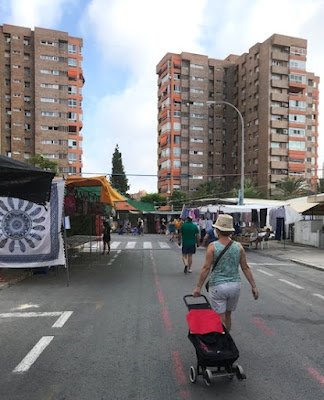 That isn't me by the way! I am behind the camera. 😀

I didn't find the ones I wanted so as the market was getting crowded and it was getting hotter I decide to turn around and get back home. I had a refreshing dip in the pool in mind!

I think it is strange sometimes how things happen! I just caught a glance of something as I was making my way out of the market and in fact I was just starting to go through the lane which leads out of the market when I thought "wait a minute, was that a stand I saw?".

I had to turn around and go back of course! 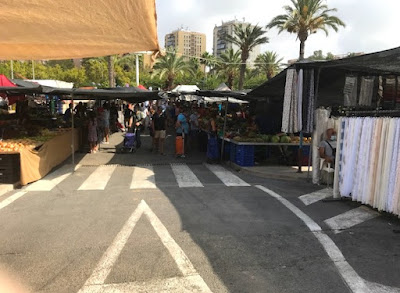 After all this time looking for a plant stand (the right sort) for the balcony garden I finally found one! It wasn't as tall as what I had in mind but I liked the simplicity of it and I think a coat of varnish would look good on it too. It was also economical! 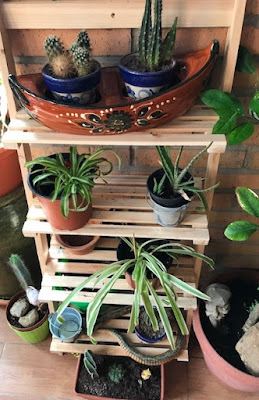 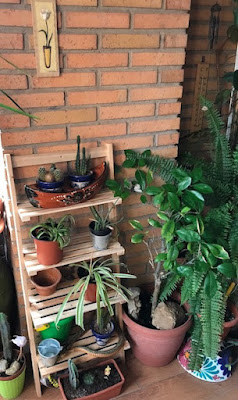 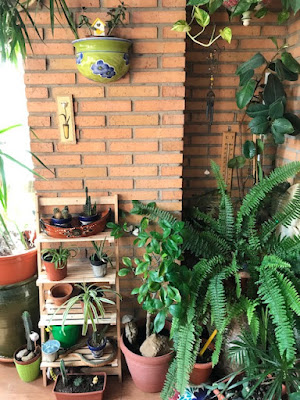 I am looking forward to going to the bigger market in Benalua Thursday week as there is a lady there who sells some lovely plants. I have been going to her for years and I just have to tell her where I want to put the plants and she advises me what would be suitable and how to care for them. This time I hope to pick up some pretty pots of flowers to put on this stand. It looks a bit drab at the moment.  I am still looking for a mini solar water fountain. At present the only ones I have found are much too big.

Ah! before I forget!    I also found out who has been overwatering the plants. Sr P of course!!  Now I am not very knowledgeable about how to take care of plants but I do know if you overwater them the roots will rot!  Anyhow it seems,after I obtain his views on taking care of plants, that his gardening philosophy is, water is life so the more you give them water in summer the better they flourish. My reply was...what a load of rubbish and I told him I am not creating a balcony marshland but a garden. He has been banned from watering the plants totally! As an after thought I think I will get him some aquatic plants to care for!

This next item that I shall be putting away in my time capsule is my mother's Boot Hook Button lacer.   She brought it over to me to keep when she came for another visit in the late 80s. She used this when she went to her first school way back in 1935 when she was five years old. 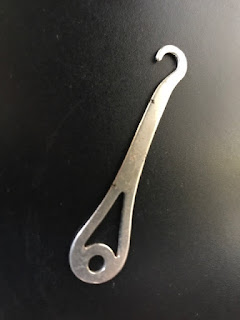 This was classed as a modern hook in the 1930s not like the ornate ones used in Victorian times.

I found this video clip which will show you how these hooks were used. Although this video is about the Victorian and Edwardian era hooks continued to be used in the 1930s.

I love these snippets of history!

I still haven't finished what I am making so I have nothing to show you at present.

I believe I have mentioned before that I am an admin on the facebook Random Acts of Crochet Kindness group. We have noticed lately a really large influx of new members from  Australia and the US.

RAOCK is becoming very popular there too!

US and OZ bloggers you may find a RAOCK make any day now!  As I write the numbers of members on the group have gone up to nearly 65,000 strong! 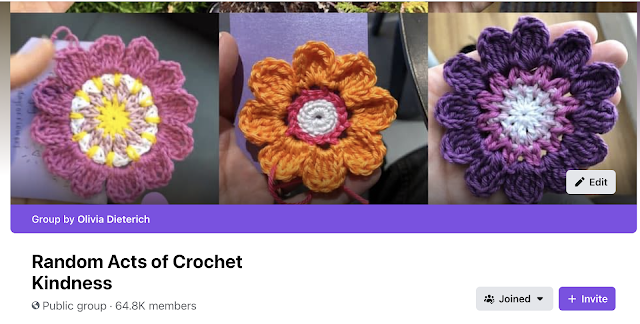