A little bit of foolishness! 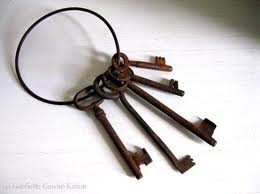 I wanted to make a couple of little gifts for four of my students who have passed their LCCI 2 London Chamber of Commerce examinations with distinction.
After giving it considerable thought and  messing around with this and that crochet wise I came up wit the following.
All a bit of nonsense really....a key-ring with a difference:- 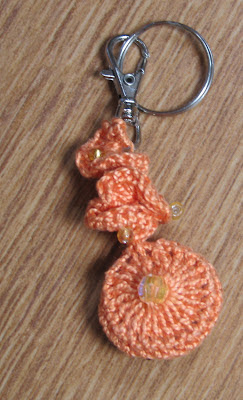 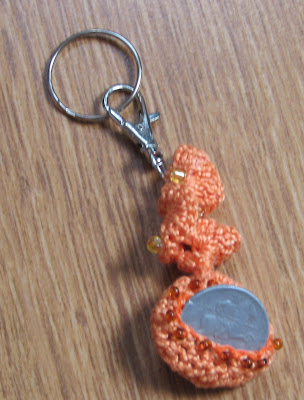 A little bit of history!
What was happening in Spain in 1941 when the rest of the World was trying to get to grips with the fact that a Second World War was underway. At that time Spain was under the oppressive power of a military dictatorship ruled by the Generalissimo Francisco Franco, on ending victoriously the Spanish Civil War which had lasted from 1936 to 1939. 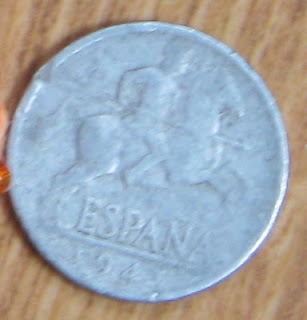 I collect coins of all sorts and I use them as merit prizes in class...they are very popular. 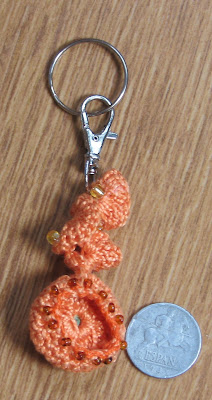 This key ring was made with No 5 Perle cotton in Tangerine and I used a No 2,50 crochet hook,a small amount of embroidery silk,some tiny beads and a swivel lobster clasp. Its really simple to make.

I will have to make a couple more key rings but two must have a more masculine note to them as I don't think orange with beads will go down so well with men. I don't think I'll make it so fussy as this one either.Personally I think its a bit fussy and I shall not make the twirl with so many Trebles a few less will loosen up the twirl a little.

My giveaway is looming near ! I've 67 followers and I need to reach 80. That is my objective 80 followers on my Followers Google connect list for my first giveaway and it has to be nowish because it is when I have the time.
I just do some private tuition throughout the summer months as most of my students have left the city to go to their apartments or villas by the beach or up to their homes in the mountains. Lucky them..... me like a twit down here in the hot hot city....well at least I have the beaches and the swimming pool....tch!...... one will survive I suppose!

As it is I am preparing already (got to get the maximum fun out of the prep  too) I have decided I will put a little of this and little of that and perhaps one of these and one of those ....oh yes I'd best add a couple of those too just in case ...after all its my first giveaway so its got to be good.
It will of course be open to the world and any off world bloggers who may be lurking, peeking into my blog too shy to follow but who are prepared to come forth and take the plunge! LOL!

Welcome and hello to my new followers ,Shirley at The White House, Lena at Frugal and Thankful and Rae at Felt by Rae. Thank you for joining me here and I hope you'll visit often.


Amanda :-)
PS: 9th July this morning ! Whether its the Monday morning feeling or not I keep looking at this keyring thingy and the more I look at it the more I hate it!!!!  Its a mess and too fussy!

Back to the drawing board!!!