"Variety is the very spice of life ,that gives it all its flavour",William Cowper 18th cent poet.

I know that is a well-worn cliche but it seemed appropriate for my post today as it is rather a mix of topics.

I also find it quite curious where some of these quotations come from. I have to admit I like to find out the whys and where froms of idioms and quotes.

A dog with personality and a mind of his own 🐕

I thought I would tell you about Lenny. He isn't my dog but my sister's dog. His antics do make me laugh!   Lenny is a young dog and has just had his second birthday 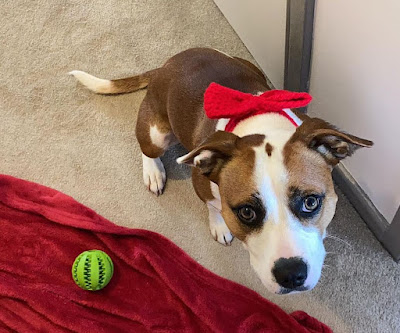 The birthday boy!   That is the red bow I crocheted for him. My sister tells me he doesn't mind wearing the bow at all but I am not so sure as he does look a little forlorn in this photo. He is probably thinking, "Jeez what I have to put up with ... a flipping red bow."  LOL!

Now this Lenny boy is a bit stubborn and pretty lazy. He is definitely a city lad! My sister lives in Torquay, South Devon and there are lots of lovely walks there to the coast, the beaches and also plenty of beautiful country walks too. She likes to get lots of exercise and takes Lenny out several times a day. As far as Lenny is concerned that is fine for doing his business and chasing the ball a bit in the park but other than that... there is public transport one can use instead of partaking of his human's fanatical urge to walk everywhere!

Lenny has bus rides on the mind!

Where there is a bus stop he stubbornly SITS to let his human know he is exhausted and cannot possibly walk any further!  Although my sister tries to avoid all bus stops Lenny joyfully even tries to cross the road dragging his human with him to get to that bus stop! 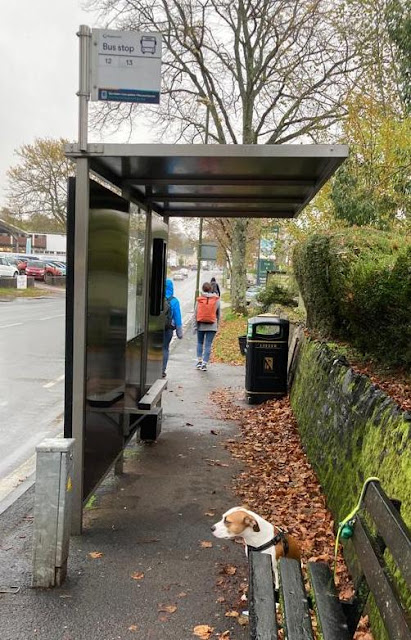 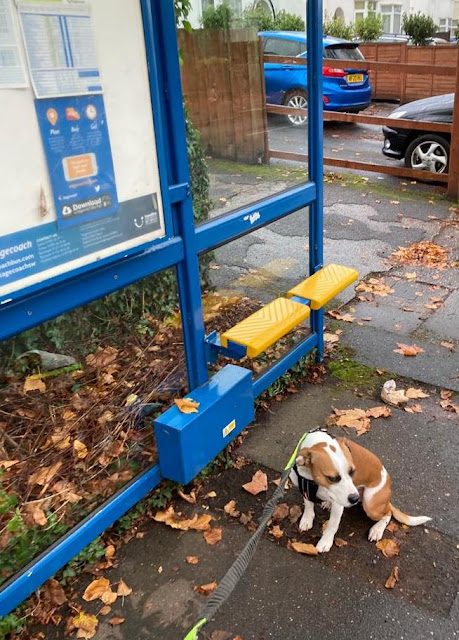 Heaven forbid that a bus draws near when they are on a zebra crossing because he automatically SITS or tries to drag his human to the door of the bus.

I do have to say though in his favour that he is very protective of his home and will warn strangers or invaders loud and clear that it is HIS home! Mind you if said stranger should be allowed into the home he will launch a frenetic licking attack just so they know that he is in control.

He patrols daily the inside perimeter of his home warning passersby that he is on home security patrol duty. Should said passerby get too near to his human's living room window then his body language comes into effect to warn them of the dire circumstances should they try to pass that barrier! 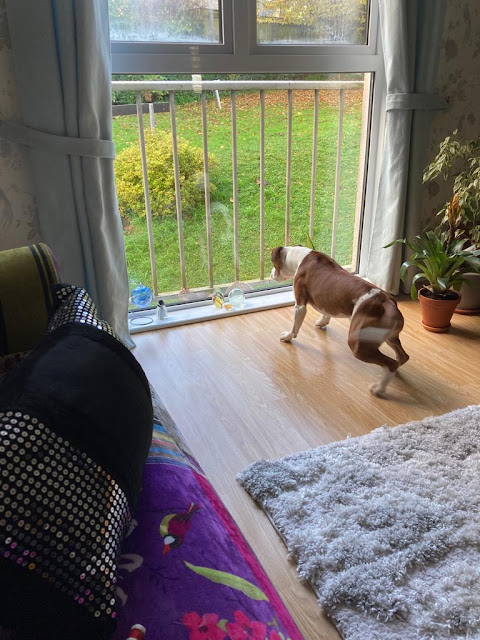 Can you see who has invaded Lenny's personal space on the other side of the glass?

Lenny does have friends who pop round now and again to see if he wishes to play. 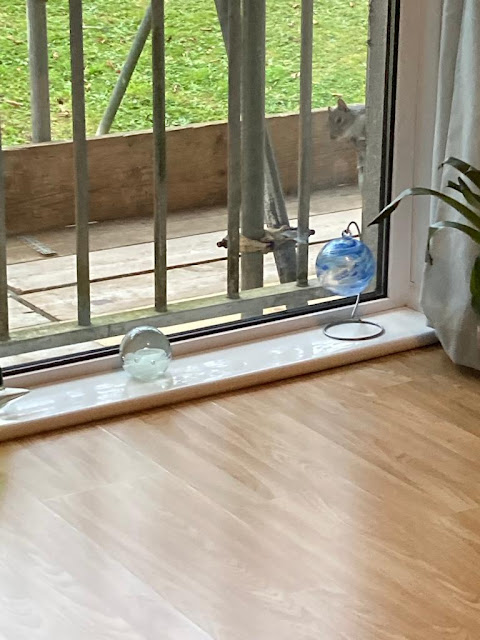 I am looking forward to meeting Lenny in person in the flesh next year.

For those blog friends who have showed an interests in how to separate a baby orchid from the mother plant, transfer and pot the babe. 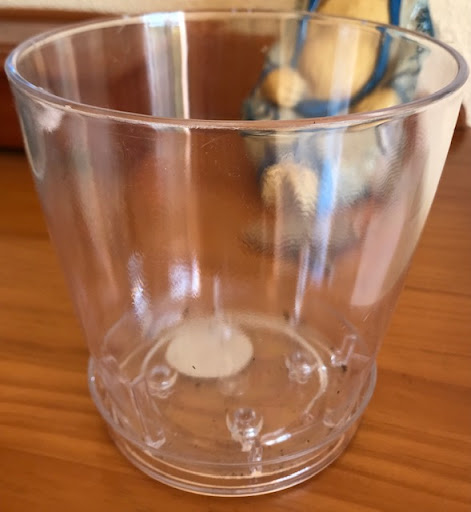 These are the instructions my sister sent me who received the details from her teacher:

The babe needs to have at least two 2 inch approx aerial roots before pulling off of the mother plant. Wet area of baby root and pull off very carefully.  If you find it is not coming away from the mother plant easily then use a sharp knife.  Slice down root area very carefully but do not cut the baby's roots at all.

Add soil (Orchid soil is mostly bark so it is very loose) in a small transparent pot. Small as in very small as orchids like to feel snug and cosy in their pots. Don't bury the babe in the soil just gently cover it with soil, light layers and the aerial roots leave them don't try to push them into the soil as they will break off.

I haven't potted my babe as yet. I think the pot I have bought is too big (see above).

I also have to find out from my sister or online when to water it and how much, also the light conditions.

Since posting this yesterday I have been looking at video clips online to see how to water the baby plant. There are lots of videoclips giving advice and tips of how to do this but this one in particular clarified some of the doubts I have. It also contradicts parts of these instructions I have posted here but that is fine I expect everyone has their own way of doing this. All the same I think I am going to go with cutting the stalk a little bit below the Baby plant itself when separating it from the Mother plant as advised in the video clip.

Surprise! I do believe I have another babe on its way on the same mother plant. 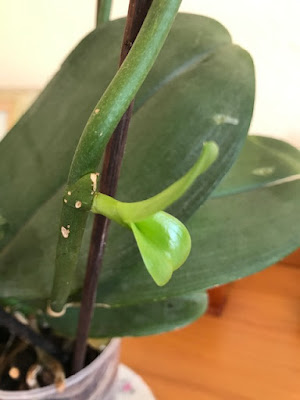 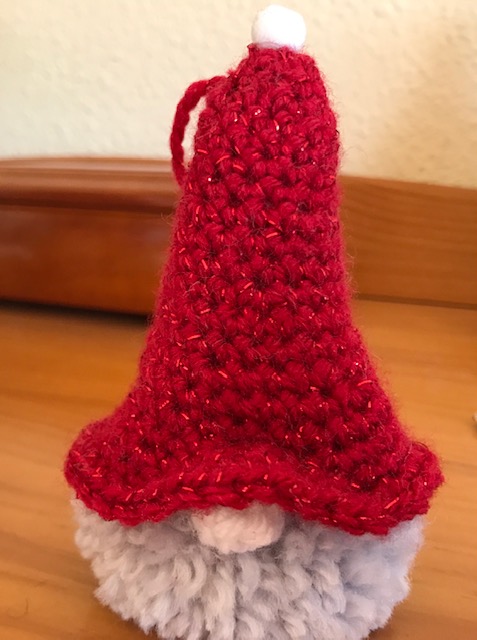 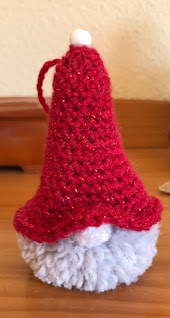 I just need to find a little "Merry Christmas" sticker and my card  Tree gnome will be on its way. 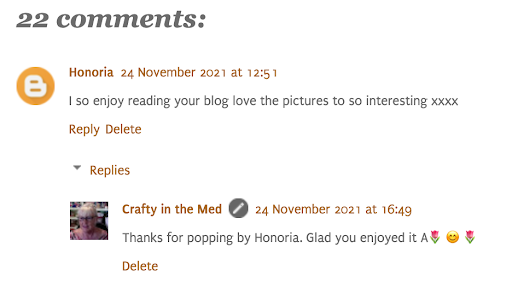