We went out on the trail again this morning!! 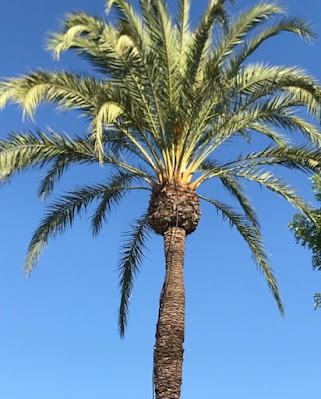 I overslept....had a sleepless night...I suffer from RLS( restless leg syndrome) at times and last night was one of those times. This meant I was late for our walk so I was not in the best of moods and dragged my feet for the first part of the route not paying attention to much....in other words feeling just a tad miserable.  I jumped pretty quick though when a black rat shot across the path right in front of us!!!!.   Daughter Nº1 had been respecting my morose silence but that was shattered when we both voiced our disgust at seeing a rat....we don't like rats!!!

Do you remember our doggie friend Timba from our last little adventure well we had decided we wanted to find out how she was so my daughter had been asking questions in the town if anyone knew where she lived. The detail she obtained from some of the locals wasn't the most precise information but she was told about a house at the end of a path where Timba possibly lived. 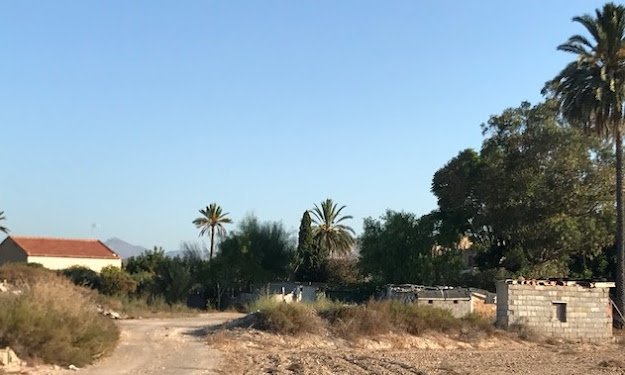 This is the place so we decided to call in there and ask if Timba lived there. We were quite hopeful and chatted about seeing Timba again and this could be the place... when... suddenly my daughter stopped and said to me "turn around slowly and lets get out of here!!"  I argued about stopping and why....and she said "lets just move away we can't call in here at the moment." I asked her why again and she said we are being watched ... I was a little put out but when she curtly said , "Mama, there's a big dog watching us."               I immediately caught sight of that dog which was a rather large German Shepherd and he was not chained up! Now I have always lived around animals and I am not afraid of them but I am not daft!. It was pretty obvious he wasn't in friendly mode going by his body language which seemed to me to be saying I'm watching you and if you come any nearer.....!!  He was obviously doing his job and he was definitely on guard duty!! 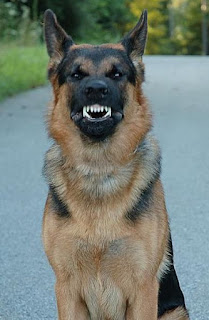 Now this is not the real guard dog but an image from Google. Very similar to the guard dog we left behind except in all fairness I have to add the dog was not showing his fangs as in this photo.

We went on our merry way and soon forgot that bit of a fright. We decided we would use the photo I had taken of the place to check with the locals again if it was the right spot and possibly acquire the name of Timba's owner.

We finally found the blackberries that my daughter had seen during one of her walks and we couldn't find during our last trek. They did indeed look like blackberries but the flowers just did not coincide with the flowers I can recall from blackberry bushes when I used to go blackberry picking at home in the UK, so I was reluctant to pick any of the berries. 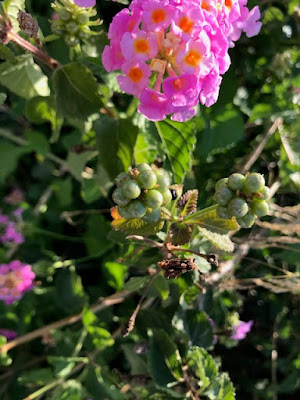 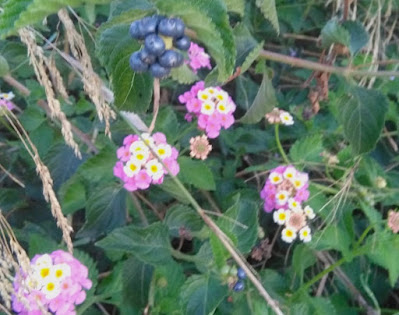 All the same we had the photos so we decided to upload the photos to the Med plantnet app that my daughter had recently downloaded to her mobile to be able to identify it.  Many thanks Linda at Linda's Crafty Corner  for that suggestion of uploading a Fauna/Flora app to our mobiles....great idea!

I paid more attention to the vegetation during this second walk and took the following photos: 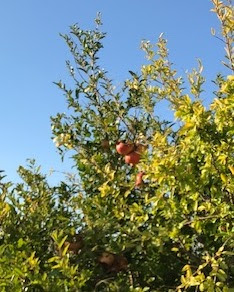 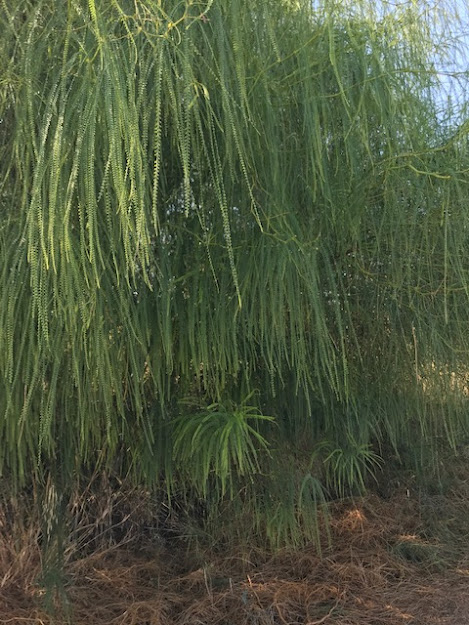 Really not sure whether this is a tree or an overgrown shrub. It reminds me of a willow tree but not quite! The leaves are really whispery and feather like.

The three white horses were in their orchard again: White horses as beautiful as Tolkien's Elven steeds....well nearly!!!  I took photos this time! 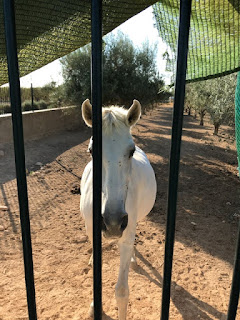 I do not very much like that they are behind bars and the orchard they are in does not seem to be very big but my daughter assures me that she has seen all three horses out being ridden by their owners quite often. 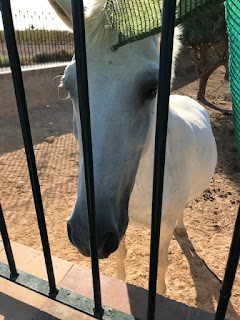 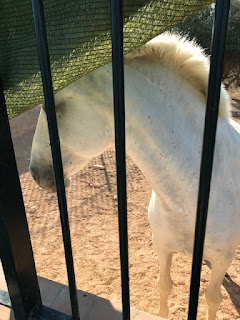 We decided to go a bit further this time and continued on into the Torre Azul residential estate...what a labyrinth......wonderful villas and beautiful gardens but we got a bit lost  and it was getting hotter so we decided to back track for the long walk back home. 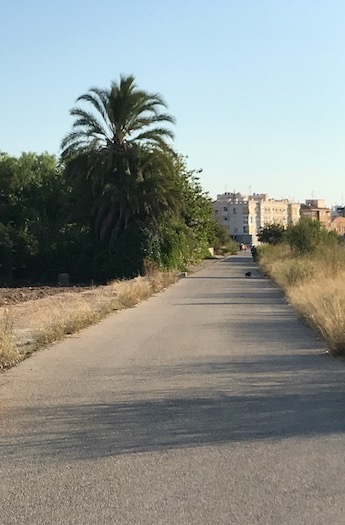 Once again Tea and home baked croissants revived us considerably!!!

Last month we had the painters in to redecorate the lounge and the hallways. This meant moving practically everything into the spare bedroom. Sr P as usual tries and gets these onerous chores done as quickly as possible shoving everything in rapidly...therefore dear bloggers accidents do happen and a lamp shade was smashed. This particular glass lampshade (as you can see in the photo) was from a lamp which I had found some years ago in a little shop which does not exist now. It is quite impossible to try and obtain the same lampshade to fit this lamp. I was particularly proud of my find at that time and it was perfect for the little french writing desk I have in the entrance to my apartment.

I was thinking it would be quite impossible to get a replacement for the broken lampshade, never-the-less I gave it some thought and started looking around the shops for an alternative shade that I could adapt to this lamp. 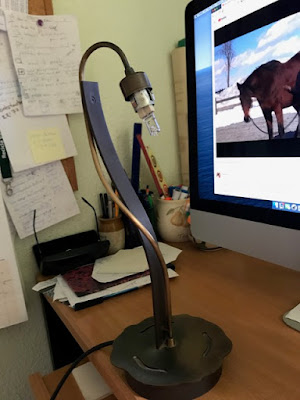 I finally found a little ivory lampshade which only cost me 1,90€. 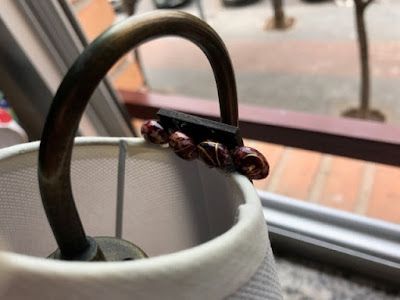 I knew this little shade wasn't going to fit on the lamp properly but I do have a glue gun!  I literally stuck it to the metal band at the back of the lamp and covered the horrible glob of glue with beads.

I chose some chocolate coloured beads from my bling bowl to cover the glue (those beads really do remind me of chocolate coated peanuts but with a bit more glitter) LOL!!! 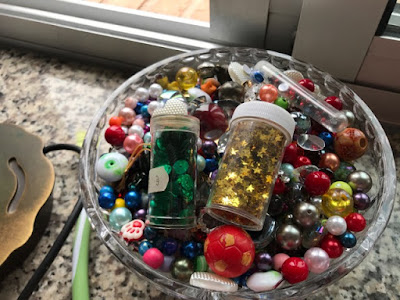 and there you are a little makeshift but not too bad 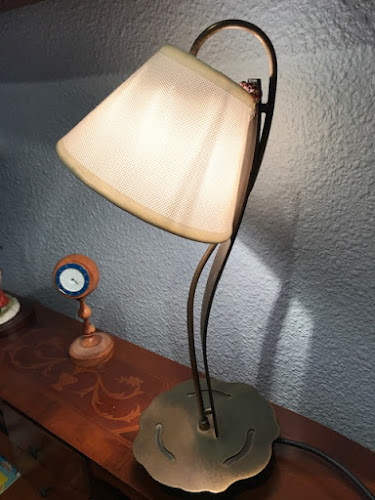 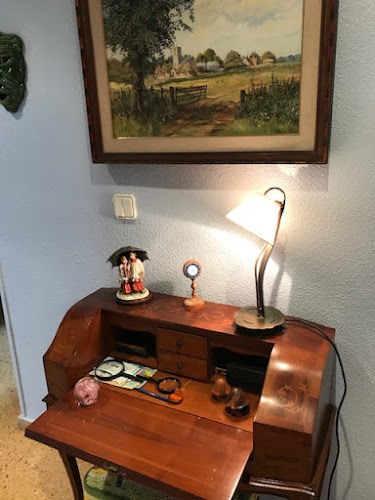 I made this RAOCK at the end of June.

Her Majesty is in flight;off and away to start up a brand new Honey Bee Hive. 🐝

I used Katia Capri cotton for her Majesty and a 2,5 hook. This was a free pattern but I did tweak it a bit!  The crown was my own freeform work in Anchor Nº5 cotton.

She will be dropped off  in the park in front of our housing estate very soon. 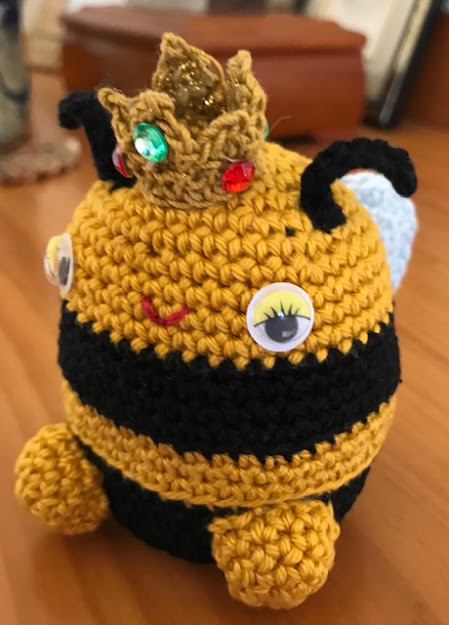 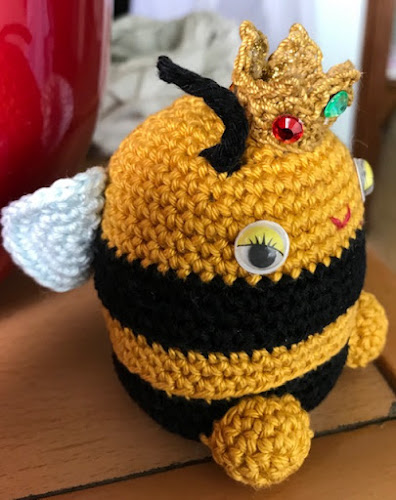 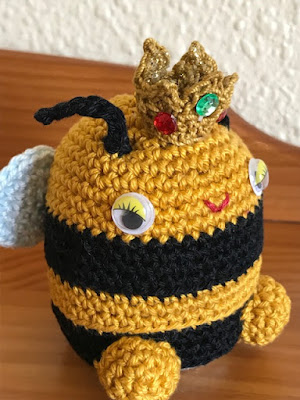