The Many Attitudes of a Cat!

My grand-daughter Cookie (aka Rebecca) has a ginger cat who she says is the reincarnation of the Egyptian god,Ra! Officially his name is Tomas but he actually has a few pseudonyms as well, such as Sir Thomas,Thomas Ra. Pasha or The Whinger. 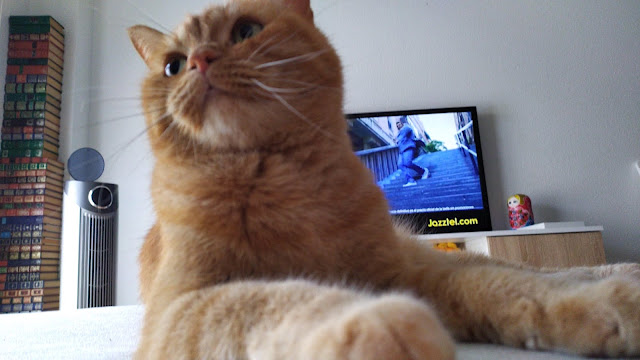 He is a city lad and from the capital,Madrid. He was given to Cookie by his previous owners, friends of the family ,because they knew Cookie loved animals and Thomas needed a different type of home. In his Madrid home he liked to sneak into the neighbour's flat and sleep on his bed unfortunately the neighbour was allergic to cat hair so that caused a lot of friction with the neighbour. He also liked to go walkabout if anyone left the street door open and as they lived near busy roads with high levels of traffic it was very stressful for them because they were scared Tomas would get run over.  They thought he would be happier living in a smaller place like Torrellano.  Cookie of course was delighted and she loves him to bits!

He is a cat that demands a lot of attention and is very vocal if he does not get his food and cuddles on time. 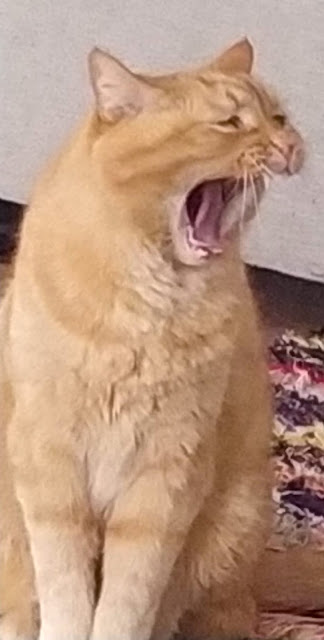 This chappie is really smart and has got the ladies (daughter and grand-daughter)in his home at his beck and call and should they upset him at anytime he leaves a little reminder outside of his litter box just to warn them he is not at all content! 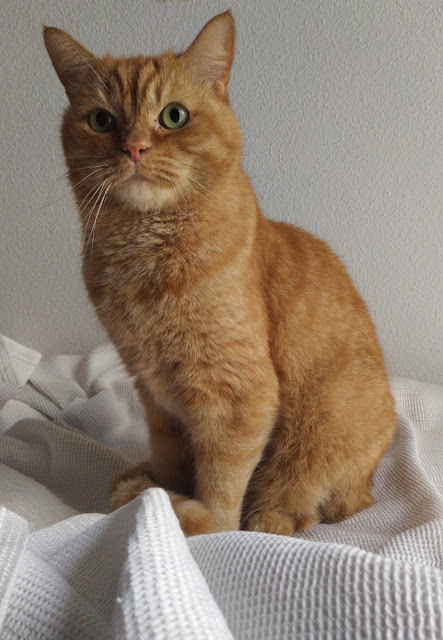 He knows the neighbours very well; the ones who like cats the ones who don't and the one who has a big bad dog. Every morning he insists on being allowed out to patrol his kingdom. He patrols from the 4th floor down to the lobby checking if there are any new smells,anything not quite right and accepting graciously an endearing word from the nice neighbours but avoiding or ignoring the uncivilised ones.  Sometimes, as he lives on the 4th floor, he pops up to the roof terrace and may have a snooze in the sun,check the weather and that there have been no intruders sneaking into his territory.  However,recently he has been a little wary about going to the roof terrace as it seems there was some sort of incident with a seagull !

He detests Cookie's tortoise "Lunita" (little Moon) because he doesn't like Cookie picking Lunita up or paying any attention to the tortoise at all. 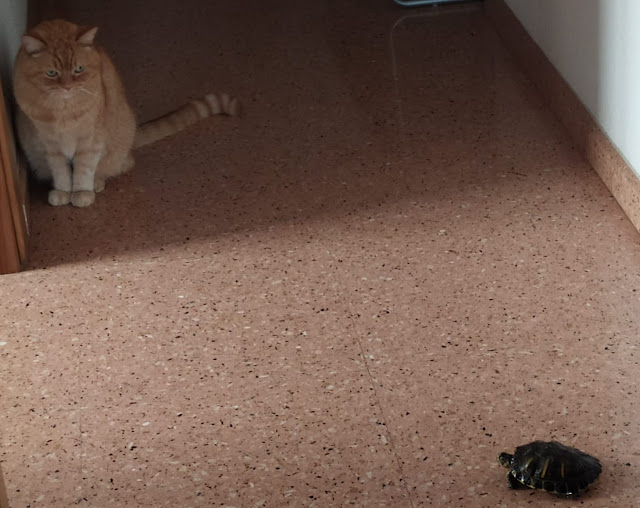 When Lunita was very small Tomas decided that Lunita was just a waste of space and didn't fit in his home so he thought he 'd have Lunita for tapas. Luckily Cookie grabbed him by the tail and shook him so much that he dropped his titbit and ran. After sulking somewhat at the shocking treatment he had received he gracefully accepted that she could stay after all.

They are still not buddies even now that Lunita has grown quite a bit and has a harder shell. Although he does try to be social towards her by offering a helpful pat now and again when Lunita is taking her slow daily constitutional along the hallway. 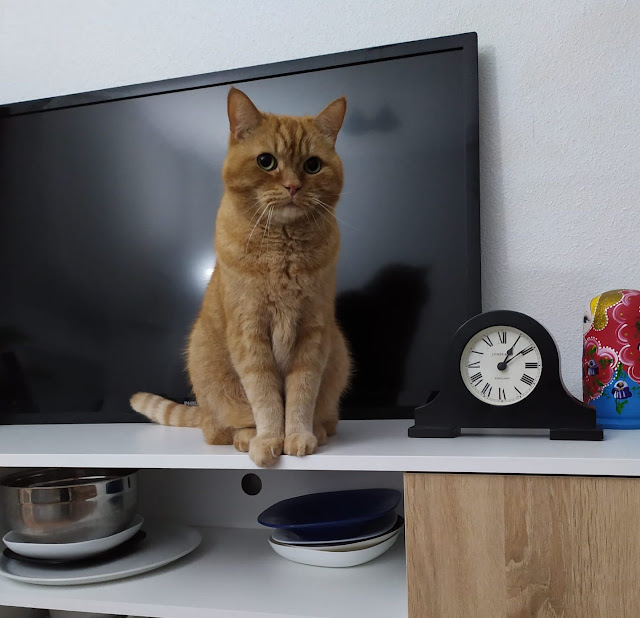 This is his "don't you think for a minute you are going to watch TV until I have had a decent cuddle and you've scratched under my chin vigorously " posture.

He does like to offer a helping hand to the the teacher lady who gives online classes but isn't too happy when he isn't allowed to parade in front of the monitor so the young 'uns can see what a beautiful boy he is. 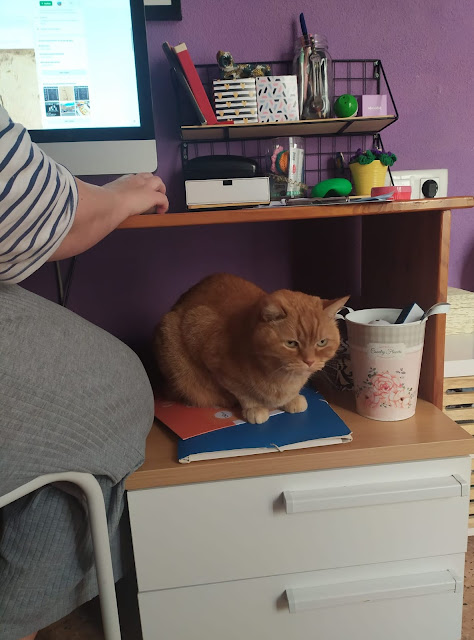 Life can be so stressful at times so he takes a little quality time for himself and watches some of the TV series, particularly the romantic ones. 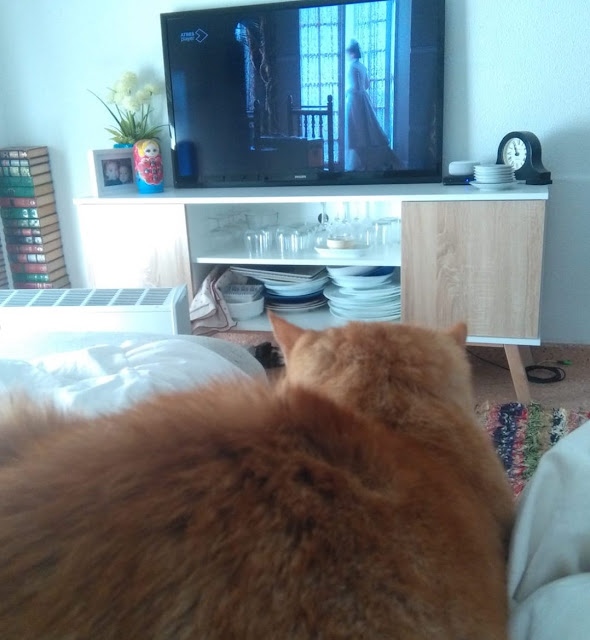 Unfortunately I can't show you my recent  RAOCK make because I haven't quite finished it.

Having to deal with the preparation for the April Tax declaration is taking up a lot of my time at present. I do like to get all the documents together well in advance so I do not have to deal with any surprises at the very last minute. 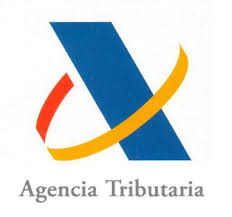 Have a good week and stay safe