thank you very much ...not!

As if I didn't have better things to do...

My neighbours and I received last Thursday notification from the Town Hall indicating that our address has been changed.

We are not a street any more but an avenue!  The avenue has been named after a certain Alicantino citizen who the city wish to publicly honour and who they believe deserves public recognition.  There was even a ceremony to uncover the new name plaque! Do you think we were invited, we were not. Do we know who this person is who has been granted this honour,we don't. I certainly don't and even Sr P said he doesn't know him either and Sr P practically knows everyone in Alicante!

Now... we have a very long list of places we have to notify of our change of address and lots of documents have to be changed.

Many thanks to Meredith for this inspiration from her recent very intriguing post on her blog Mereknits.    It has reminded me it is something I had in the back of my mind to do! I am not getting any younger and I have the time to do this now,so I thought I should make a start. I am thinking if I write about one family treasure/ heirloom in each post I can then later collate it all into a single pdf document and save it on a pen drive. At least that is the goal! There are some things I just don't want to be lost and my great grandchildren will need to know why I kept all these things over the years and likewise why my mother did and my grandmother did.

I am starting off with this tin-box which is bit of a family joke .  It isn't really that much of a relic/heirloom as it is approximately 38 years old but it has been with me as of day one back then in 1981 when  I opened my own language school... all those years ago. 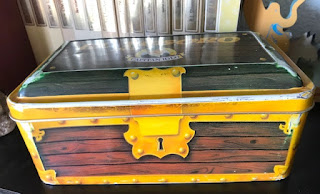 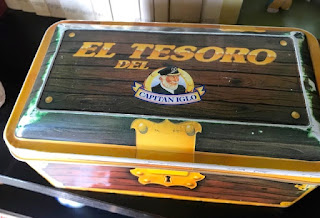 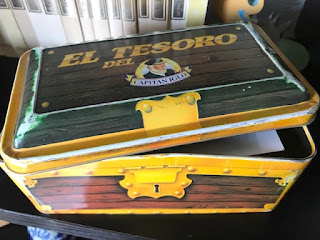 I started my school in a small premises which had an office and one classroom. Funds were pretty limited after decorating and furnishing the school (not really a school then) and paying for a large amount of publicity.  Can you imagine day one taking in enrolment fees from parents and I had no cash box at all and no money to spare to buy one. All monies paid in were haphazardly stuffed in an envelope.  That lunch time I went home and looked around for some sort of box or tin to put the cash in and to take back with me to the school that afternoon.  I had been shopping the previous weekend and had brought a special offer of frozen Fish Fingers and this tin " Captain Igloos Treasure box " was part of that special offer. I won't go into more detail but this became our cash box and it also became quite a novelty. I became so attached to it that I refused to use the new one that we brought later on and always used the treasure box for the petty cash. When I transferred the business to my daughter she said she wanted the treasure box too so it stayed there until she opened up her own school in other premises. Even though it was pretty tatty I was determined not to lose sight of it and I made sure it came back to me. It always triggers a rush of memories every-time I use it or look at it! It has been with me so long and I still use it for little treasures that I want to keep safe.

I  feel quite pleased with myself as I am steadily using up all the leftovers in my stash to make RAOCKs. This is my latest creation:  Anja the Orange tree gnomess. 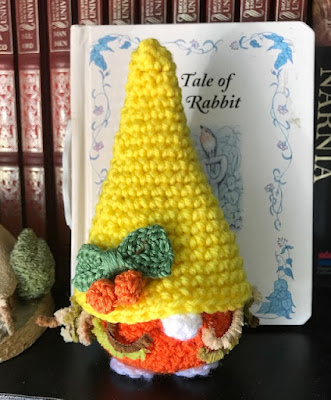 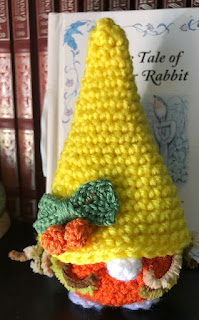 She will be going out smile 😀 hunting as from this Friday.

I apologise if I haven't finished replying to comments on my last post but this new medicine I am taking makes me queasy. I lie down on the settee for a little while,munch on a cracker and drink some water and the feeling drifts away. During the good intervals I can get back to writing.