Welcome to my two new followers Kate at booty-fulthings and Mary Jane at Mary Jane's tearoom , thank you for joining my blog.
Wisegeek tells us that Computer addiction is a relatively new term used to describe a dependency on one's computer and the internet and has already been given a label by psychologists,namely  Internet disorder addiction  (IDA). They go on to describe it as an addiction that can creep up on you before you know it and can destroy relationships by one partner's computer addiction. 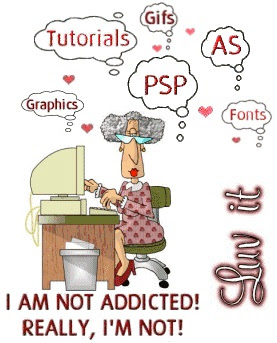 So just where am I going with all this …. Nonetheless in comparison and discussing addiction and here’s the bombshell I have to admit to having C.A.D and at times wonder that due to this I sometimes ask myself am I not a bit of a freak?   Such is my need that I take it with me wherever I go I practically always have some in my bag 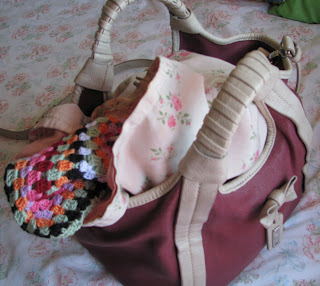 and it goes without saying if I have an appointment at the dentist or doctors or anywhere where I have to wait you can be sure I get it out to while away the boredom of waiting. I even take it with me when we are invited out to dinner to a friend’s house because I can do it perfectly well after the meal while chatting and I can sip my wine at the same time too.
I wander aimlessly if I have nothing on the go too and I fight during the day to find that moment to sit down and satisfy the need to continue with it.
Sr P tells me I get quite annoyed when I can’t have one of those moments and I have to admit he is right,as my old Auntie May down in Somerset would have said  “her gets right grumpy!”

There you are you see I am inclined to think I do have C.A.D or in other words crochet addiction disorder.

You may denote a touch of humor in this post but I assure you there are times I think to myself that too much crochet is not good for me. Therefore I occasionally try and refrain from doing crochet and I turn to the following:

BUT I always return to crochet…perhaps its in the genes!!

I also wonder is there anyone else out there who has C.A.D and if so it would be so good to hear from you.  xx Amanda