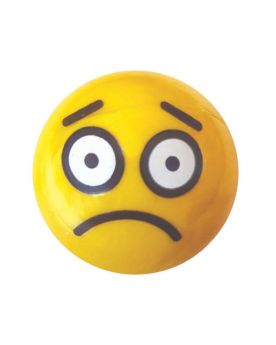 I have been meaning to see how I can blog from my mobile phone for quite sometime and yesterday with a calm mind and totally prepared to have a go at it I set to the task. I am quite happy sorting out things on my iPad or desktop computer but when it comes to my mobile phone it drives me loopy! I have to set my mind to it! I am sure you know what I mean

I signed into my blogger on the mobile and could see the different posts and also comments. ..brilliant I thought! That is really what I want it for to be able to reply to comments and post comments on other blogs. I prefer to set up my new posts from my desktop computer. All was going well so I thought I would reply to the comments on my previous post. I wrote a lengthy reply to Betsy's " The Simple life of a Queen" comment  and posted it but lo and behold an error message appeared! I tried again but this time I copied the text before posting, the same happened again… so annoying! I was getting a tad mobile phone irritated by then. I decided to check to see if it was a generalised blogger glitch and went to my desktop computer to try there.Absolutely no problem replying to Betsy’s comment on my desktop pooter!  Although I was pretty fed up with my mobile phone by then I went back to it to see if I could download a free blog app. Apple store has several  although I would have to pay for them so I was even more fed up then and decided to leave it for the time being!

What a waste of time…grr!

Coincidentally, these two comments that I received from Cherie at North Yorkshire Craft Guru blog and Happy Hooker .an independent blogger,

match exactly what I had thought and commented to Sr P the day we were strolling through the Park of the Sea (previous post) and saw the pomegranate trees and the date palms. 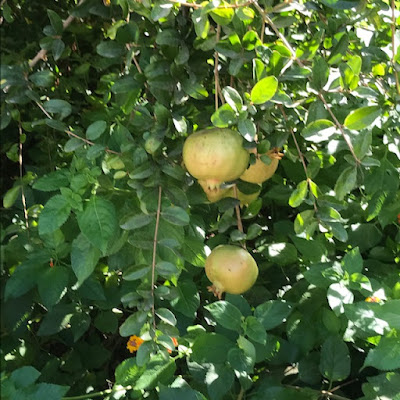 I asked Sr P if it was alright to pick some. The trees were heavily loaded with fruit and it seemed such a shame for it to go to waste and particularly as Sr P likes pomegranates.  He told me it was no good picking any because they were "bordes". This confused me even more because "Bordes" in Spanish means to be stroppy,curt,rude or crude!

I did a little bit of research on google and found that fruit trees that are used for ornamental reasons such as in parks are a weaker strain of fruit tree which is planted in a poorer quality soil which is not fed or enriched enough for the fruit to be edible. I gather you can try to eat the fruit they aren't toxic but your mouth would just be full of seeds and there would be no taste to it at all.  There you go Cherie and Happy Hooker that's my reply and the explanation. I'd say also to give a translation to the use of the Spanish word "Bordes" in this context I would say the fruit trees planted in parks produce  "Stroppy fruit" and you don't want to mess with them!

Do you remember Thomas Ra who I posted about in March.

He is being very very naughty and will not leave Lunita the turtle in peace. 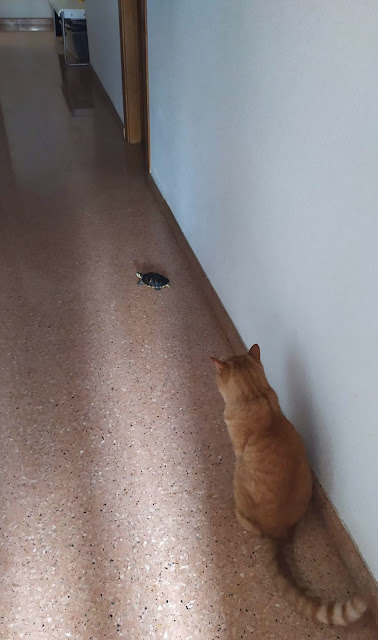 He just will not leave the poor turtle alone!   I mentioned  in that previous post that initially he had to be punished for trying to eat Lunita but he seems to have forgotten that and is now treating her as prey again. Thank goodness Lunita has grown quite a bit and he can't get her in his mouth.

Lunita is a brave little soul too and she defends herself as the other day she bit Thomas on his paw...which he deserves.

I have told my grand-daughter to give him another severe tail shaking if he continues to harass her. He doesn't like that at all!