I will pass on the "eating glitter" bit but I am convinced a good breakfast does certainly help me to shine!  I think most of us have heard the phrase at sometime or other that breakfast is the most important meal of the day.  I am inclined to agree with that and have always had an ample breakfast first thing before going off about my daily routine ,in fact ,if at anytime I have missed it I found I would begin to feel quite queasy by 10ish.

When I say ample I don't mean a heavy substantial meal like a typical Full English breakfast(much as I love it!).

You know... I have always thought...who has the time of a morning (Sundays perhaps) to dish up a full English breakfast before going to work? 😔 Toast,cereals with fruit and of course a mug of tea or two is what I considered ample.

I tried arduously to instil into my daughter the need to have a substantial breakfast of a morning. While she was under my thumb she had breakfast every morning before she left for school and later college. It usually consisted of a mug of cocoa and a small bowl of cereals with some fruit which she would swished around continuously hence a large portion of the cereals stuck to the side of the bowl. I'd say probably only four spoonfuls would have got eaten.

As an adult she has slipped into her own routine which is having breakfast and elevenses together and mostly in a cafe.

I have never had to worry about Sr P's breakfast as he always adhered to the Spanish custom which was to have his breakfast out at a local cafe with one exception that was during the Pandemic national lockdown. He found it extremely difficult not being able to go out for breakfast. There were constant moans and groans about the quality of the coffee I brewed for him!

Time and the aging body changes things of course! I continue to have an ample breakfast but as I am on a high-fibre low cholesterol diet the buttered toast has gone and the milk in the cereals too. I eat three different types of fruit usually banana,grapes and apple slices sprinkled with oat flakes and nuts and mixed in with a low fat plain yogurt.  I allow myself one mug of tea twice a day. The latter was indeed difficult to reduce as I used to drink easily six cups of tea a day.  It's ok now though I got rid of that habit! 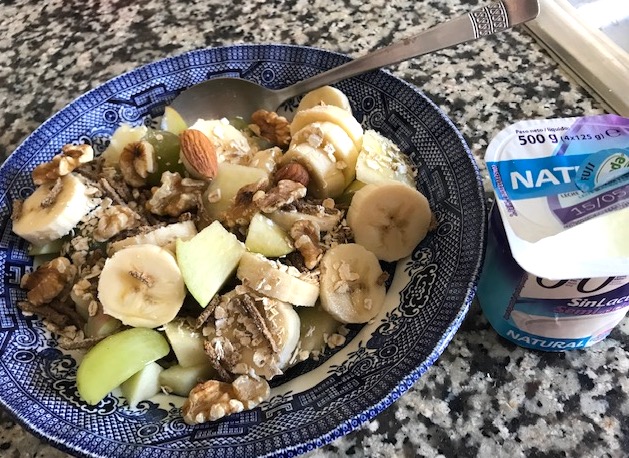 Needless to say when my GD is staying with us I always make sure she has an ample breakfast first thing.😁🍲😋
Relaxing, no rush, casual house hunting again.🏠
Two weekends ago during our usual Sunday outing we went for a stroll along the Albufereta beaches. The Albufereta is a small town very near to Alicante City and its beaches practically link up to the City's Postiguet beach.