Holidays are wonderful but they are far too short. Its post-hols depression once again!!1


I'm shattered ....devastated!!!   My husband has cut up my heart and put it in a Spanish Omelette. Now then...for those of you who are wondering what the dickens I am talking about you best pop in to my last post here. I wouldn't like you to think Sr P has gone down Hannibal Lecter's road  and Silence of the Lambs is repeating itself in real life!!!!

I've popped in these photos of two adorable fairies that my sister has knitted for her great grand-daughter E. I just love them and they have such delightful names; Fairy Rose and Fairy Daisy. 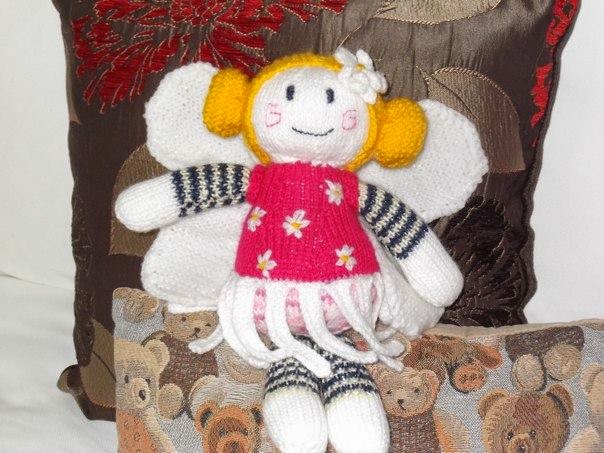 and here you have a photo of little E who took to her Fairy Rose straight away!

I am pleased to  inform you my Mediterranean Giveaway goodies arrived safely to Zana at Zana's homemade   in New Zealand and surprisingly quick too. I added a few bits more to the original contents but I'll leave that for Zana to tell you about.


On the receiving end my heart missed a beat when I saw this parcel arrive: 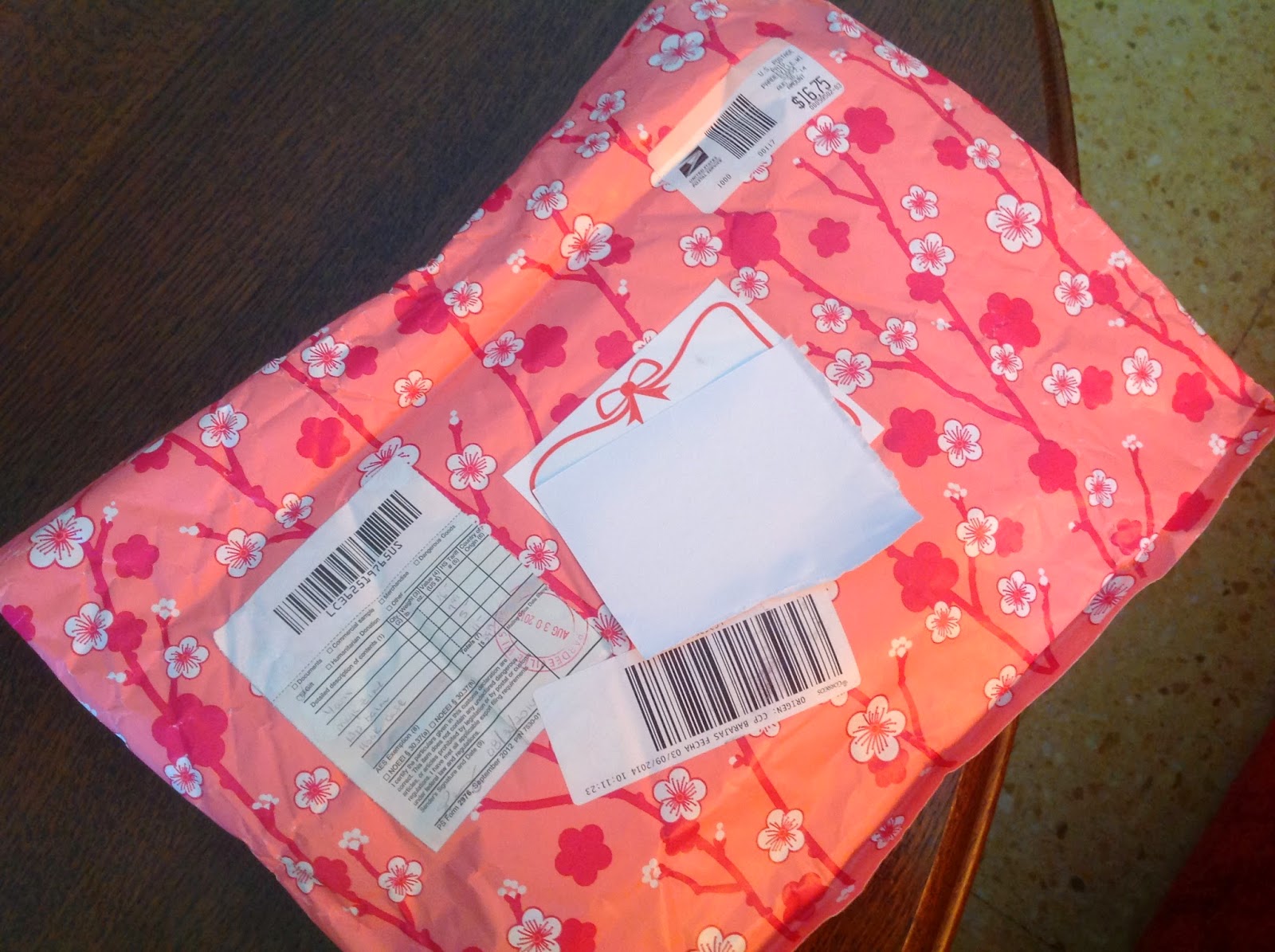 I just love the cheeriness of this postal jiffy bag. You know straight away that its something good inside!   It was indeed! The smashing giveaway that I won from Sue at Mrs Micawber 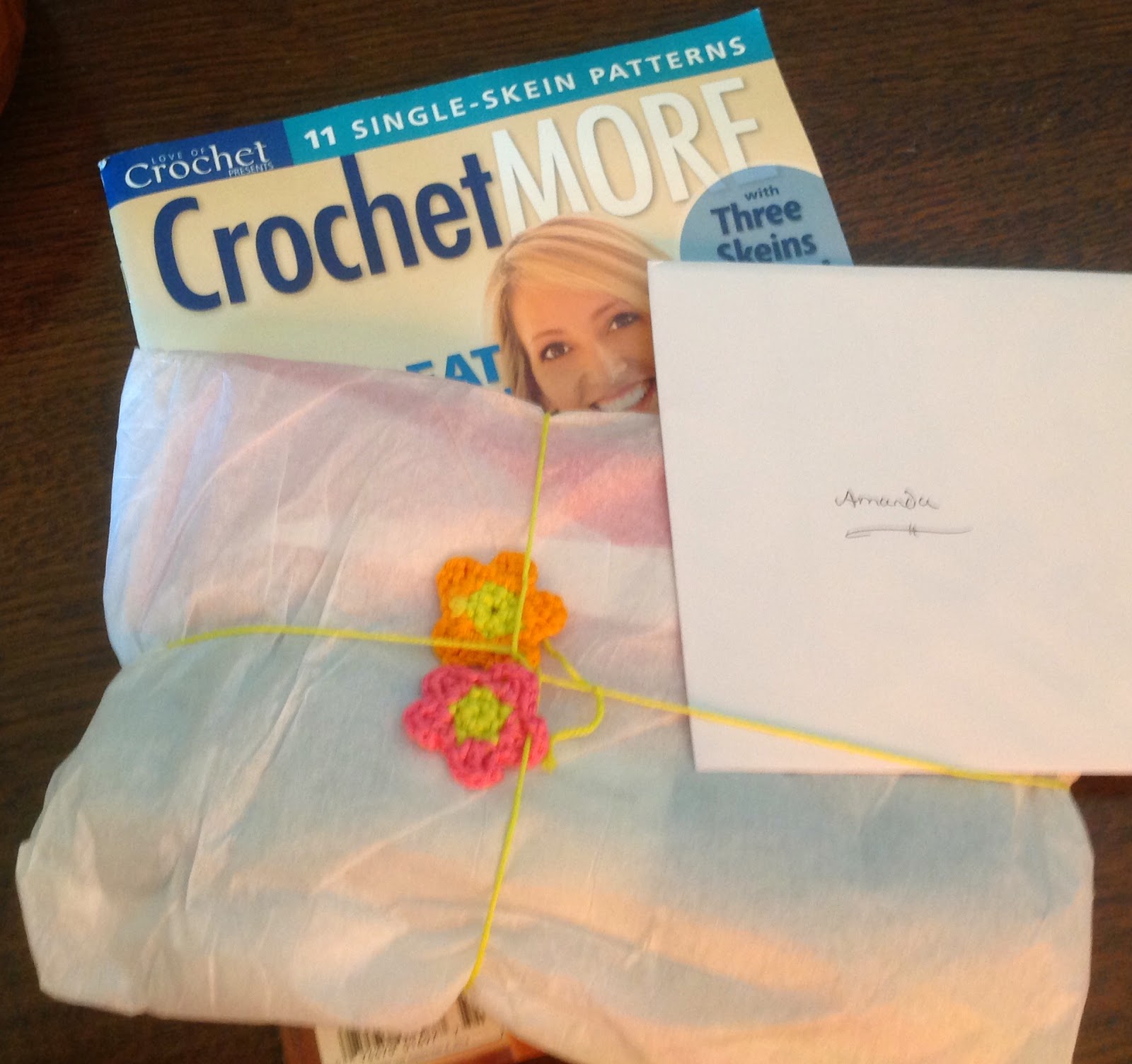 Just adore how the parcel is sealed up with two crochet flowers. The magazine well I can tell you it is truly years since I have had a Crochet Magazine in English in my hands! 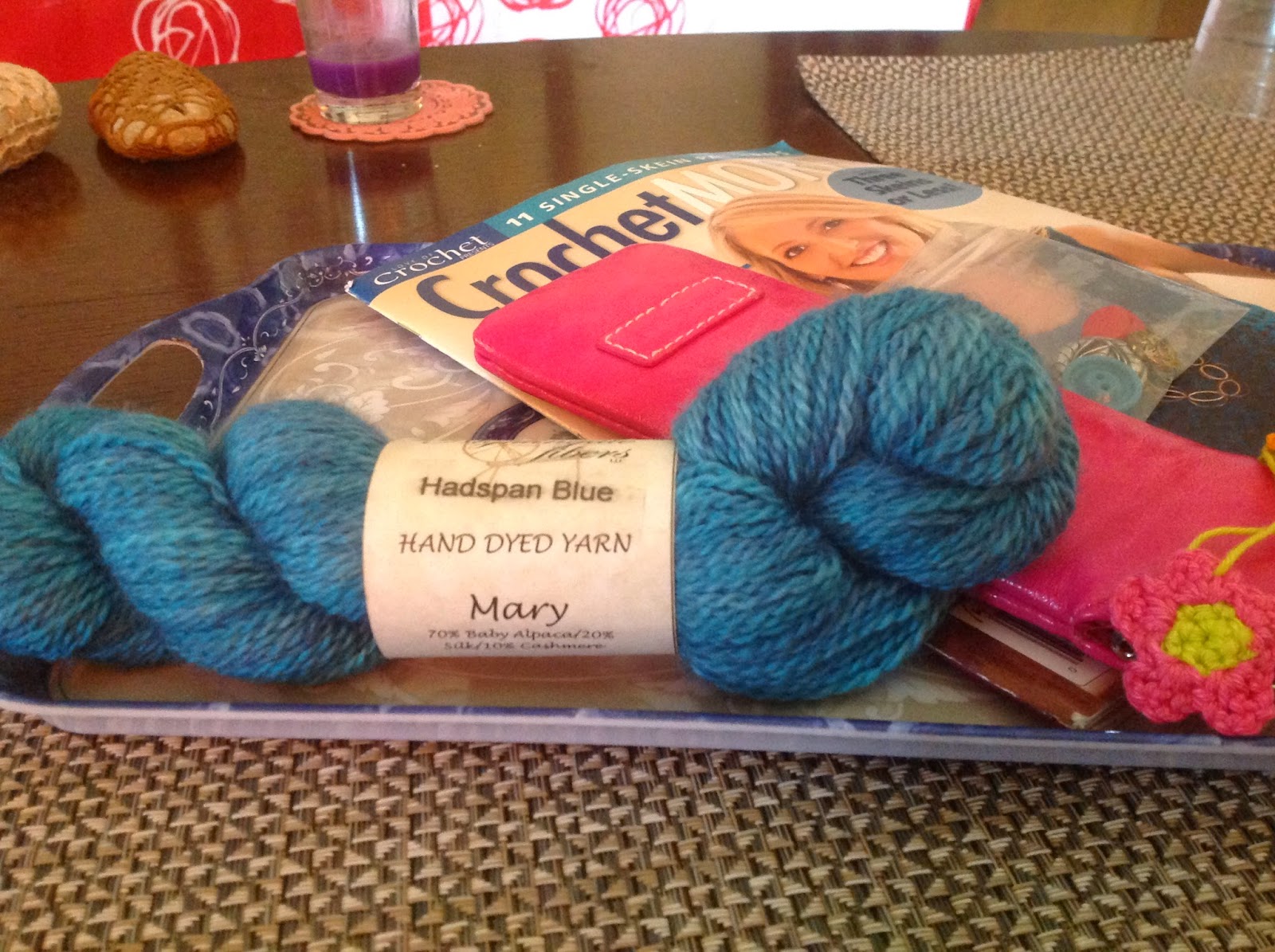 The yarn is unbelievably soft and I just love that colour.  At present I'm putting it away until I decide what I am going to make with it  for ME. As it is all for ME this time!!!!   Sue also sent me some buttons for my button cache and the beautiful pink crochet hook purse.  Sigh!!! all gratefully received ,thank you Sue!


Busy busy time of the year for me but I've been squeezing in some quality time here and there to make up my bits for the Golden Autumn swap that Blueberry Heart is hosting which I will send to my swap partner Ellie at Feltabulous around mid October .  I can't show you any of it because it would be telling .....wouldn't it?


Here is one of my makes which I made during August. 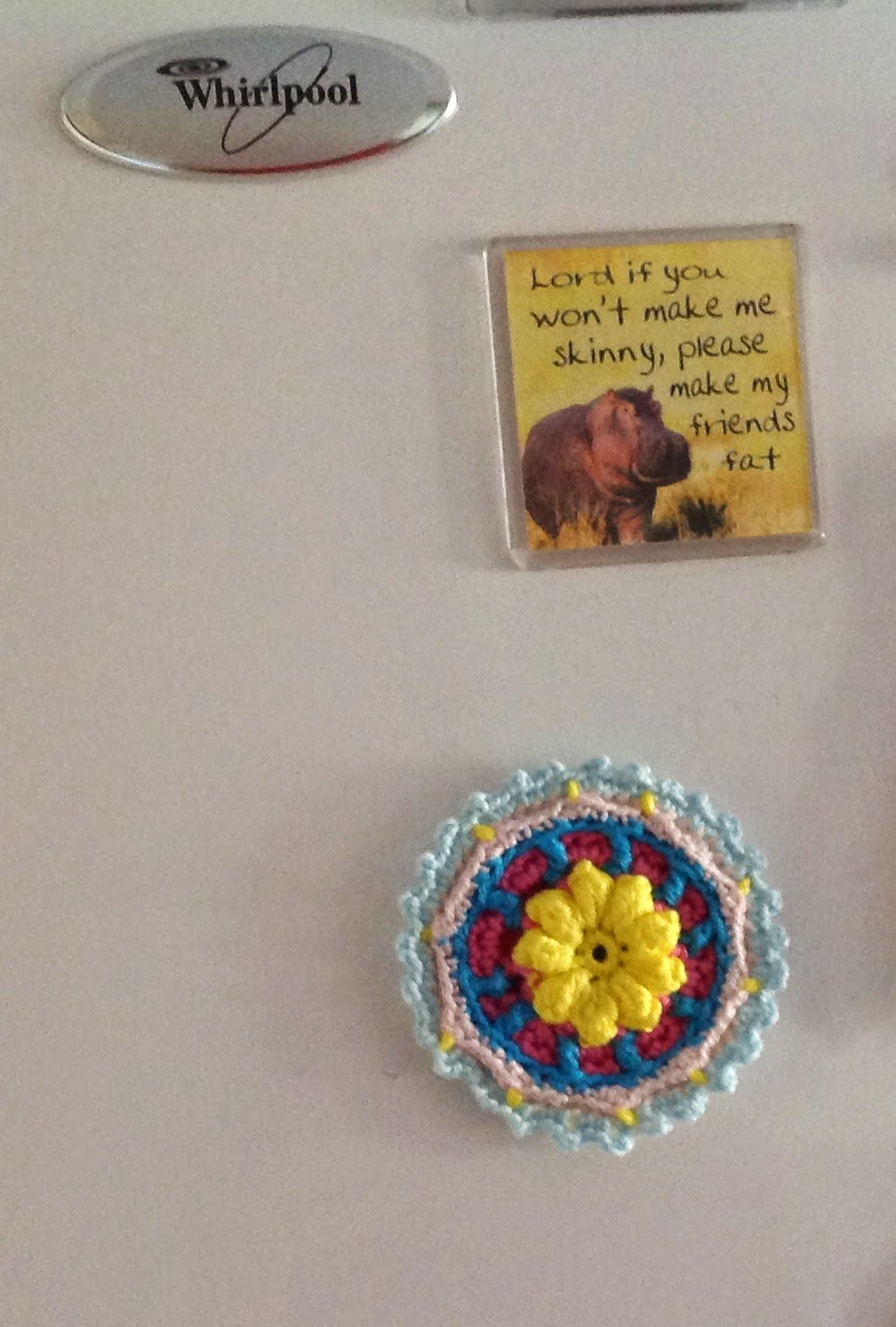 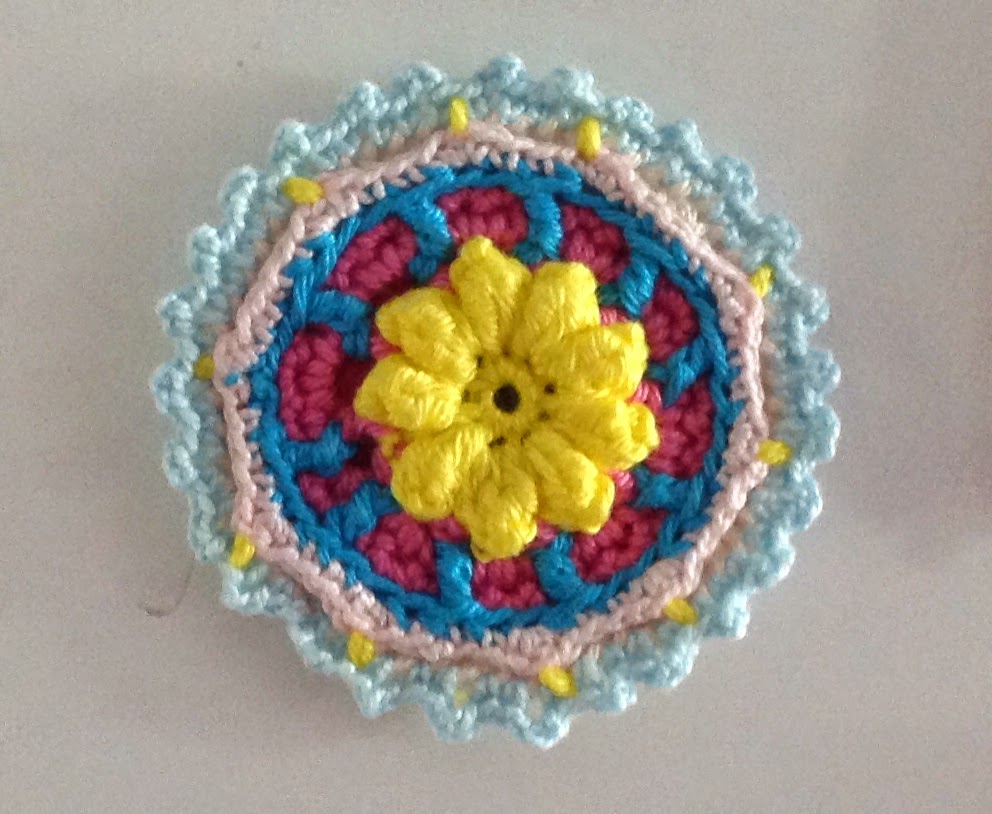 I don't feel as if I've achieved much craft wise throughout one month's holiday but the pig sty had to be converted back into a home again so I've been cleaning and cleaning and now it looks decent.

We did managed to get to the beach to do it a bit of snorkel diving though.
We've returned to a little secluded part of the coast which isn't really a beach because it is mostly pebbles and rocks. We used to go there some years back so we were pleased to find the sea is as crystal clear as ever and fabulous for snorkel diving.  You don't get a lot of people there either because of the lack of sand but we don't mind that at all, as armed with our good old plastic sandals and spending most of the time in the sea  it  doesn't bother us. We did notice though because of the dunes further up that it has become popular now with nudists.They camp up in the dunes and come down to the sea to swim. We can usually hear them coming down to the shore because they don't know what plastic sandals are and the uuuh, ouch,ah ,B*** sounds as they step on the pebbles are quite loud.  I think I'd do quite a roaring trade in the summer selling plastic sandals and I think they might just break their nudist rules and cover their feet.  That nudists inhabit the dunes doesn't bother us at all either as we go there for the clear waters and the snorkeling which Sr P and I enjoy so much. It has even crossed my mind and I have discussed it with Sr P too wondering what it would be like to do the same...go nude that is..... but being blessed or cursed with a vivid imagination I imagined It would just be my luck that one of my students would one day come walking towards me and I assure you I'd die there and then of embarrassment!

I'd like to welcome my new followers. Thank you for visiting and please do comment when you can.

I'd like also to invite you to pop in to Step's blog Show and Tell ,with a cat called Moonpie you can practically guess that there is a mystical creative crafty blogger blogging away there !   I am sure she'd love to have you visit.

Keep well you all